My birding trip this past weekend reads just like a novel… with goals to be achieved, suspense and uncertainty, good times, and a climatic ending.

I woke two minutes before my alarm was set to go off, groped in the dark for my glasses, and crawled from beneath the covers, shivering as my feet hit the floor. It will be worth it, I told myself. It always is.

Forty minutes later I was on the interstate heading south. The car was loaded with my camera and accessories, scope and tripod, binos, ID books, water lunch, and snacks. The sun, still below the horizon, was just turning the tips of the mountains pink, while the dissipating mist hung like golden glitter in the air. What a beautiful morning!

Reaching our rendezvous point, I joined six other birders as we piled into two cars and headed south again. My primary goal for the day was to enjoy God’s creation and have fun. I was also hoping to take at least one photo I would be happy with. And, there was the possibility of seeing a new bird. While my life list isn’t all that long, I don’t get new birds very often, especially near home. The advertised list of possible species had included a couple I’d never seen, and I was really hoping one would show up.

South of Pueblo, we turned off I-25 onto Burnt Mill Rd. and headed west. On one side of the road, the back-lit cholla needles glistened against the high plains desert. On the other side, well-watered pastures held horses or cattle, while cottonwoods lined the St. Charles River. Scattered shreds of cloud cover tempered the warming summer sun.

The bird sightings started almost immediately: “Meadowlark on the right!” “Chipping Sparrows.” “Black tail, buff underneath—is that a Say’s Phoebe?” “There are Lesser Goldfinches on the black-eyed susans!” We pulled over, grabbing binoculars. Mourning Doves and American Kestrels lined the telephone wires. A Red-tailed Hawk soared overhead, while a Swainson’s Hawk perched atop a pole. Everyone kept remarking on the beautiful day, exclaiming, “Why don’t we do this more often?”

Turning onto a dirt road, we followed the cottonwoods along the river. Cactus gave way to rabbitbrush and junipers. Random birding stops resulted in a Cassin’s Finch and a flock of Canyon Towhees on the dry side of the road, and Eastern, Western, and Cassin’s Kingbirds on the watered side. A Gray Catbird “meowed” in the brush. The overhead wires now held Common Grackles, starlings, and a lone Yellow-headed Blackbird.

At one stop, we had aimed our scopes at a kestrel perched high on a dead cottonwood branch when it suddenly took to the air and hightailed it out of sight. What in the world? All became clear when a larger, darker bird floated down and landed on the same snag. It was a Peregrine Falcon! We all had good looks as it turned its head this way and that, as if posing for its admirers. 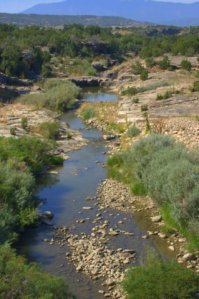 The morning was becoming mid-day when we arrived at The Bridge, a local hotspot. Here, Burnt Mill Rd. crosses the St. Charles river at a small canyon, with quiet pools of water and lots of rocks. As we climbed out of the cars, we were greeted by the cascading melody of a Canyon Wren. Even better, the bird was quickly spotted as it hopped around in clear view on the boulders under the bridge. Canyon Wrens are heard much more often than seen—it was by far the best look many of us had ever had.

In an effort to tear us away from the beautiful view, our leader baited us with the possibility of Lewis’s Woodpeckers at the next stop. Sighting one would mean a new life bird for many of us. Gathering up the scopes, we reloaded the vehicles and drove another mile to a green valley studded with large cottonwoods. The woodpeckers had been sighted here in previous years.

This time, unfortunately, all was quiet… no woodpeckers. I was disappointed, but consoled myself with the fact that the weather was perfect and I was out with friends looking at birds in a beautiful place. Plus, I was hopeful about several of the photos I’d already taken. There was certainly nothing to complain about!

Our next stop was the home of another birding friend, with a yard full of flowers, feeders, and birds. We sat on her deck and watched hummingbirds as we ate out sandwiches. It was fun to trying to distinguish the immature Rufous hummers from the immature Broadtails.

After we’d eaten we took a short hike around a nearby pond. Flycatchers were everywhere, and it took all our pooled expertise (and some guesswork) to sort out the various species. That one was a Western Wood Pewee while the one bobbing its tail had to be an Eastern Phoebe. But which “Empid” was this? We finally decided on a Dusky Flycatcher, but since it wasn’t saying anything, no one could be totally certain.

Then, as we were thanking our friend for her hospitality and heading back to the cars for the drive home, someone had the bright idea to ask her about any local spots for seeing Lewis’s Woodpeckers. “Of course!” she exclaimed. “There’s a ranch a couple of miles from here that always has a flock.”

We quickly agreed to prolong our trip and check out this new opportunity. Turning from one back road to another, we followed her directions. There was no way would we have found this on our own. As we pulled up at a pasture gate and opened the car doors, we could hear the raucous noise of about a dozen birds calling through the treetops. Sure enough—Lewis’s Woodpeckers! It seemed that they were everywhere. At almost a foot in length, they were impossible to miss as they flew from tree to tree, making quite a racket. The beautiful rose-red of their faces and underbellies faded to white over the chest, while their green backs provided the ideal contrast. What gorgeous birds!

Loud peals of  thunder issuing from the dark clouds massing overhead finally caught our attention, and we realized it was time for the long drive home. I felt abundantly blessed—we’d had a wonderful day, we’d seen some great birds, I was optimistic about several of the photos I’d taken, and I had a new bird to add to my growing life list. It doesn’t get much better than that!