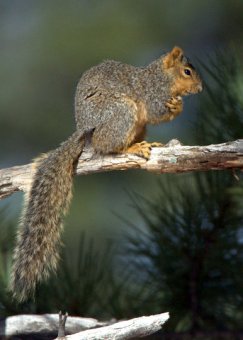 If you feed them, they will come. Anyone who puts sunflower seeds into a birdfeeder sooner or later has to contend with squirrels. And if you grow a garden—well, squirrels like many of the same foods we do, plus flowers, tulip bulbs, and numerous other plants. The question isn’t whether or not you’ll have squirrels in your yard. You will. The question is, what are you going to do about them?

I used to really like squirrels. After all, they’re cute, with bright black eyes and fluffy tails. And they’re fun to watch as they chase one another up one tree and down the next. That was before I started feeding the birds. Within hours of hanging my first feeder, the squirrels had discovered it. (It took the birds two weeks.)

That first feeder was made of wood. Silly me, buying a wooden feeder. Three days later, the only parts remaining of my $35 birdfeeder were the two pieces of Plexiglas that held in the seed—the squirrels had eaten everything else! But that was only the beginning.

One morning, several months later, I went out to fill my new metal feeders and counted nineteen squirrels in front of our house. Nineteen! That’s when I woke up to the fact that I was actually feeding the squirrels, and the birds were lucky to get the leftovers. Since our budget can’t afford unlimited amounts of “bird” food, something had to change. And that’s when the wars began.

First, it’s important to know one’s enemy, so I did some research. I identified my culprits as Fox Squirrels (Sciurus niger), members of the rodent family. I learned that they’re 18 to 28 inches long, and weigh 1.5 to 2 pounds. These “tree rats” are able to climb not only trees, but brick walls, tongue-in-groove siding, and pretty much anything else. They can squeeze through a 1-1/2 inch opening, and chew through screening, plastic, and metal (plus wood, as I’d discovered). They can walk tight ropes and leap across gaps eight feet wide. 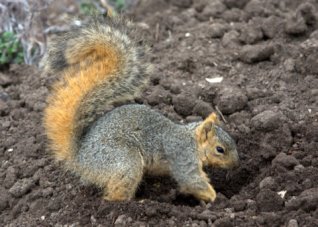 Not only that, but they’re always hungry. Their diet may include nuts, flowers, leaves, fungi, tree buds and cambium (the living tissue under the bark), suet, eggs, vegetables, tulip and other bulbs (why this squirrel is digging), fruit, wires, acorns, seeds, attic insulation, deck railings… and bird feeders (both wooden and plastic).

Since we were hosting an overpopulation of squirrels, my husband suggested trapping them, to be released somewhere else (hopefully, where no one else was feeding birds). We discovered that not only does that require a pile of permits, plus permission of the landowner where you intend to release your captives, but it also won’t do any good.

Normally, Fox Squirrels have two litters a year, one in the winter and one in the summer. Each litter consists of three to six baby squirrels. However, if reduce the population by trapping (or other nefarious methods), they will have more offspring in each litter, to quickly replace their relatives who have gone missing. It seems the world is in no danger of running out of Fox Squirrels.

Since there was no (legal) way to eliminate squirrels from our property, I started investigating feeders that claimed to be squirrel proof. I quickly learned that either we have unusually intelligent rodents, or the manufacturers live on Mars.

I tried feeders in cages, feeders that open and close, feeders on wires and feeders under domes. The squirrels quickly learned to knock the seed out of the caged feeders. They then just ate it off the ground. Those feeders with spring-loaded perches didn’t work either. The squirrels draped themselves over the top, so their weight wasn’t on the perch. I already mentioned that squirrels are great tightrope walkers, so the wires were no help.

The dome slowed my seed thieves down a bit. I hung the feeder from a rather high branch, with a dome over the top. It was still eight feet from the ground (and a huge hassle to refill). Surely that would be enough to dissuade even the most determined tree rat. It worked for three days. One particularly stubborn squirrel climbed the tree, ran out onto the branch, and flung himself at the feeder, only to hit the dome and slide off, landing on the ground with a solid thud. Undeterred, he stood up, shook his head a bit, and repeated his performance, again hitting the ground with an audible thump. Still convinced that this was the way to get dinner, he climbed the tree again… and again and again—for three days. Finally he got lucky. A claw must have snagged somewhere as he was sliding off the dome for probably the thousandth time. Victory! Within ten minutes, the feeder was empty and the triumphant squirrel headed to his nest to sleep off his feast. From then on, he was somehow able to gain a secure footing about every tenth try. I finally took down the feeder. 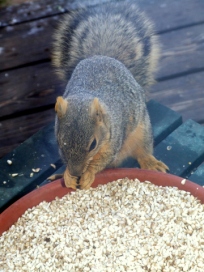 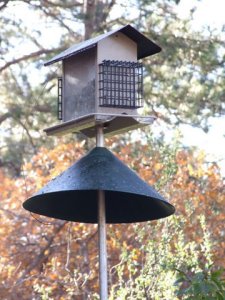 It was pure serendipity that led me to a solution that works. And it does work. I have had cone-shaped baffles on my pole feeders for five years no, and not a single squirrel has managed to get past them. At last, I’m feeding the birds and not the squirrels. Of course, we still have squirrels in our yard. They like to clean up the seed that the birds spill. That’s fine with me. I actually think they’re cute again. Once in a while, I’ll even slip them a couple of peanuts… but I don’t make them too easy to reach.