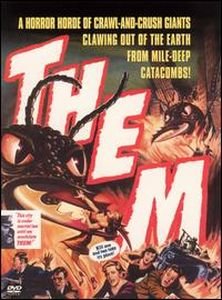 Just the title evokes images of a Japanese horror movie with giant beetles running down the streets of Tokyo, grabbing screaming people and crunching them between its mandibles.

That is not what this book is about.

Rather, it’s about the many and varied ways that humans consume insects, arachnids, and other creepy-crawlers. There are plenty of graphic color photographs, too.

This isn’t a new book; it was published in 1998. By now it should have hit the best seller lists… it’s that interesting. Since it hasn’t, I’m doing my part to draw attention to what should be on every cook’s and gardener’s bookshelf. You may never again look at the pests in your flowerbed in quite the same way.

Just the cover is enough to catch your eye. A young and beautiful Cambodian woman is delicately biting into a deep-fried tarantula on a stick. Yum yum. I can just see the signs advertising deep-fried spiders next to the deep fried Snickers bars at the county fair.

Organized geographically, the text chronicles the authors’ journey across the globe, seeking out cultures and their gastronomic specialties. As the various bugs are consumed, Menzel and D’Aluisio describe the flavors and textures (crunchy, with bacon overtones). But these meals are not eaten in isolation; the authors also describes the peoples they meet. The result is sort of a cross between a cookbook and an anthropology text.

I found this book completely fascinating, but I admit that, as yet, I have no new desire to eat even the smallest cricket. In fact, I tend to shun most shellfish (at least those with exoskeletons and jointed appendages) on the grounds that, when you get down to the details, they are really underwater bugs. Really, what’s the big difference between eating shrimp and eating grasshoppers? 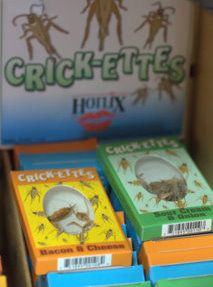 Actually, we eat bugs in our own culture. Consider the bottle of tequila with the maguey worm (actually a beetle larva) in the bottom. Or how about the Cochineal dye used in cosmetics, ruby red grapefruit juice, and a host of other products. It comes from the ground-up exoskeletons of the scale insect (Dactylopius coccus).

Eating insects and other bugs makes sense for a number of reasons. They are highly nutritious, and are very efficient at converting plant matter into proteins, fats, and carbohydrates. Plus, it only seems fair, considering how much of our food is consumed by insect pests every year. If you can’t beat ’em, eat ’em!

I’m grateful to Peter Menzel and Faith D’Aluisio for doing the gastronomic exploration for me. Sharing in their adventures vicariously is just fine. Although, I did like that jellyfish I tried in Singapore….