The sun is shining, the lawn is turning green, and the birds are chirping. In fact, it’s a balmy spring day. Surely there must be something you can do to start your veggie garden! As a matter of fact, there is, but it doesn’t involve a single seed.

If you’re like most gardeners, you’ve never had your soil tested. Every year you dutifully spread a layer of compost and/or manure over your garden, dig it in, and plant. After all, that’s what every book, article, and website tells you to do. You might even add some fertilizer, just to be on the safe side. But if you’ve never had a soil test, you’re flying blind.

I too added compost ever year, along with some blood meal or other nitrogen source. I assumed I needed to. Aren’t Colorado soils notoriously poor in organic matter and nitrogen? Then I attended a continuing education class for our state’s master gardeners, and I learned the error of my ways.

Yes, I’d heard that the goal was 5% organic matter. But that seemed so little. Surely if 5% is good, 10% is better? And everybody knows that you add manure to create fertile garden soil—right?

Well, apparently not. We really do want 5% organic matter, and more is not better. I wrote about too much compost earlier this year, and now I understand the whole problem much better. I also learned that too much manure is an even worse problem.

For one thing, compost tends to be high in potassium. Potassium (K) doesn’t leach out of the soil, so it accumulates year after year. Most Colorado soils already have plenty of K.

Plants absorb nutrients through receptor sites on their root hairs. It turns out that the same sites that bonds with K also bond with calcium and magnesium (two micronutrients essential for plant health). If there is too much K in the soil, our plants will suffer a calcium and/or magnesium deficiency, even though there are plenty of these elements available.

For another thing, commercially available manure products may actually harm your soil. When the CSU soil lab tested eight different brands of commonly sold bagged, composted manure, the results were alarming. All of the products were extremely salty. For some products, adding even a single one-inch layer to the garden, dug in eight inches deep, could contribute enough salt to stunt plant growth. Once added, the only way to remove this salt is by leaching—anathema to us water-conscious westerners.

Then there’s the fertilizer issue. Most gardeners tend to over-fertilize. In fact, soil tests reveal that our fertilizer addiction has resulted in soils having 100 times (or more) as much phosphorus and potassium as our plants need! Micronutrients also accumulate over time. It doesn’t take much for elements such as boron or copper to reach toxic levels.

On the other hand, nitrogen (in the form of nitrates) tends to leach out of our soils from year to year, and must be renewed. The question is, how much should we add? While not enough can stunt plant growth, too much leads to excessive foliage but few flowers or fruit. If you’re growing tomatoes, you’ll be mightily disappointed! 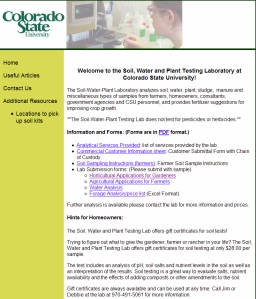 By the end of the class, I was  thoroughly convinced that I needed to get my soil tested. It isn’t hard. You can download the forms and directions for obtaining your soil sample from CSU’s Soil Lab website. (Click on Horticultural Applications for Gardeners.) Then just mail it to the lab. The current fee is $28, but you could easily spend that much on fertilizer and amendments that you might not need at all. (If you don’t live in Colorado, choose a lab in your area instead.)

Given the $28 fee, you might wonder why you shouldn’t just buy a soil test kit from a garden center. For one, those kits aren’t accurate enough to be much help. Also, they are designed for the acid soils found in most of the country. Our soils are alkaline enough to require a different lab procedure than the one in the kit. And finally, the advice you receive along with your printout is well worth CSU’s fee.

I’m still waiting for my results—they should take two to three weeks—but I have a strong suspicion that I have too much organic matter, and possibly too much salt. After all, I’ve been adding chicken manure mixed with straw to my garden for years. It would be nice to be able to take a break from all the hauling and digging!

The bottom line is that every gardener needs to have their soil tested at least once. If you notice that your veggies aren’t doing as well as they used to, then a soil test is even more critical. The results will tell you if you have a problem—either too much or too little organic matter and nutrients, or too much salt. You’ll learn the pH of your soil, and how much free lime it contains (and why that matters). Finally, you’ll discover what kind of soil you have (clay, silt, sand, or somewhere in between), which can help you amend and irrigate properly.

Get your test done now, before you do anything to your soil for this season’s crops. It will save you money in the long run. Besides, waiting for the test results will help you restrain your planting urges. As last night’s snow reminds us, it really is too early to start, despite the signs of spring.

7 thoughts on “Take the Test!”