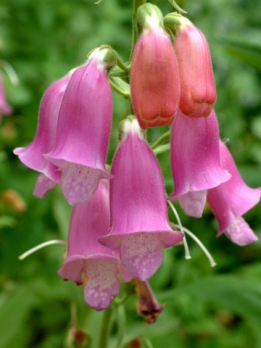 With one- to two-foot spikes of raspberry-pink flowers over a tidy mat of fuzzy foliage, perennial foxglove ‘Spanish Peaks’ isn’t your typical foxglove. Instead of the cool humidity of the British Isles, this hybrid is specifically recommended for Colorado gardens, doing well in our arid and unpredictable climate. As a result, it was named a Plant Select winner in 1999. The cultivar’s name reflects both the plant’s Spanish origins, and it’s suitability to Colorado, home of the Spanish Peaks.

Although attractive to bees and hummingbirds, ‘Spanish Peaks’ is usually disliked by rabbits and deer—probably due to its poisonous foliage. (The drug digitalis comes from plants in this genus.)

‘Spanish Peaks’ should be planted in full sun to partial shade. While preferring organic loam, ‘Spanish Peaks’ will tolerate clay. Be careful to let the soil dry out a little between deep waterings. Deadheading encourages repeat bloom, but you might get some free plants if you leave the last flower stalks to self-sow in the garden.

Like its more delicate relatives, this foxglove adds a woodland ambience to the landscape. It’s equally at home in a cottage garden. Try companion plants that share cultivation requirements and bloom time, such as various campanulas, violas and columbines.

One thought on “Foxglove ‘Spanish Peaks’”