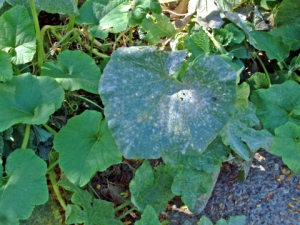 The huge zucchini leaf looked as if it had been dusted with flour. The man holding it was looking at me expectantly, waiting for my diagnosis. I was volunteering at our county’s Master Gardener helpdesk, providing free gardening advice to the general public. Sometimes we get stumped, but this time I immediately knew exactly what the problem was.

“Your zucchini plants have powdery mildew,” I told the man. “It’s pretty common around here, especially this late in the season.”

He looked perplexed. “But my garden can’t have mildew!” he exclaimed. “There’s plenty of good air circulation, and I have a drip system. The leaves don’t get wet.” 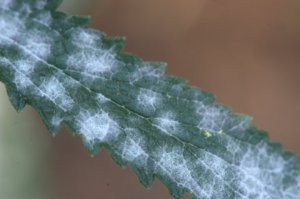 Powdery mildew is an exception to most fungal diseases in that it thrives in dry weather. This summer has been particularly hot, and it was also abnormally dry until August. In addition, the humidity has been higher than our normal Saharan conditions. All these factors combine to make conditions exactly right for the growth of powdery mildews.

There is more than one kind of powdery mildew. Different species are host specific. That is, the mildew on this man’s zucchini won’t infect this roses, and the mildew on them won’t survive on lettuce. However, the prevention and treatment of this fungus is the same, no matter which type you’re dealing with.

The best way to control any sort of plant disease is to prevent it from occurring in the first place. Roses, bluegrass, and many vegetables have been bred to resist inoculation, and I look for those varieties when choosing what to grow in my garden.

Another important practice is fall garden clean-up. As plants succumb to the end of the growing season, I go out and pull up the dead foliage. If it’s healthy, I shred it into my compost pile. Diseased leaves go into a trash bag and are hauled to the curb. Since powdery mildew overwinters on dead leaves, I’m careful not to leave anything that would re-infect my plants next spring. 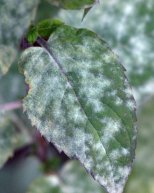 Like other fungal diseases, powdery mildew does thrive in areas with poor air circulation. Over-crowded plantings are particularly susceptible. Before sowing seeds or planting seedlings or shrubs, I check to see how big the plants will be when they’re fully grown. Then I space them accordingly. (If I want the area to fill in more quickly, I plant annuals or other temporary filler to take up space.) Proper pruning to open up dense foliage also helps to increase air flow among the leaves.

Other measures we can take include avoiding overhead watering (my client was correct), and avoid late-season feeding, especially with a high-nitrogen fertilizer. The resulting new, lush growth is particularly vulnerable to infection by mildew spores.

Once powdery mildew appears in my garden, I have two choices. If it’s early in the season, and, say, my squash plants have just started producing fruit, it’s worth my time and money to treat the plants. However, if the season is almost over, as in the case of my helpdesk client, I advised him to just call it a year and pull off the infected leaves for disposal. There’s no sense spraying a fungicide if the plants are going to die in a few weeks anyway.

If I do decide to fight the fungus, there are several chemicals on the market that are somewhat effective. Sulfur, neem oil, and good old baking soda are all organic fungicides. Preliminary studies suggest that combining one tablespoon of baking soda with two-and-a-half tablespoons of a lightweight horticultural oil (such as Sunspray) might give best results. For ornamental use only, triforine (sold as Ortho Funginex) is another choice.

Of course, if I’m going to go to the trouble to spray, I’m also going to remove and destroy the most severely affected leaves, do any necessary pruning, and avoid overhead watering (to reduce humidity around the plants). And when given the choice, I’ll always pick mildew-resistant varieties. But unfortunately, no matter what I do, I can’t control the weather.

One thought on “Powdery Mildew”