I was rinsing my hands under the faucet downstairs when a huge, aggressive monster suddenly scurried across the bowl of the sink. I screamed. Slamming the faucet lever down, I backed away from the counter, shaking, dripping on the tile floor.

Then I snuck forward for another view. Yup, a huge brownish spider, at least two feet inches across (including the legs) was staring up at me with multiple menacing eyes. Shudder.

Figuring it wasn’t going anywhere (the sides of the sink were vertical, I yelled up the stairs for my husband to come and rescue me. And being much braver than I am, he came and did just that.

If you’ve been reading this blog for a while, you might wonder—wasn’t I trying to get over this arachnophobia? Hadn’t I even held a tarantula named Rosie? Yes, yes I was, and yes I did. But… for some reason, while I’m getting much better about the pretty yellow crab spiders in the garden, I’m still reduced to gibbering when faced with something brown-and-tan, with eight skinny legs and way too many eyes. 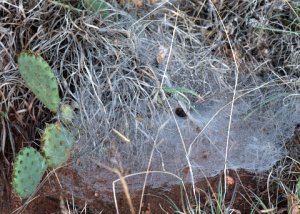 Last week my heroic sweetie and I were out hiking in Aiken Canyon, near Colorado Springs. It had rained the night before, and everything was fresh and clean. I was trying to fulfill an assignment for the wildlife photography class I’m taking at our local community college. While there were plenty of fresh tracks—deer, rabbits—there was no sign of wildlife. Even the birds seemed to be hiding. I was getting pretty desperate when we noticed that the fields were covered with funnel-shaped webs adorned with shining water droplets. Aha! Wild spiders!

Knowing that there was a spider lurking in each web, I gritted my teeth and squatted down to have a closer look. Grass spiders are a bit less intimidating than the monster in our sink (I didn’t get a close-enough look to identify that intruder), but they still scare me. Yet, I had that assignment.

The first thing I learned was that these spiders are fast! The eight legs were a blur, and suddenly the web was empty. The predator had retreated to the bottom of the funnel, far out of reach of my macro lens. I guess it pays to have eight eyes.

Not wanting to out-wait the spider, we advanced to the next web. This time, I was much more careful, sneaking up on my subject. It worked. I saw a brown-and-tan striped spider with a tapered body and very thin legs. The prominent spinnerets at the rear were distinctive.

As I bracketed the exposure settings (a dark spider in a dark hole with brilliant water droplets is hard to photograph), I realized that I was getting pretty close without panicking. It was helpful to be distracted by the need to get images.

Another way to fight phobias is to learn more about the object of our fears, so later, at my computer, I did some research. The first thing I checked was, can they hurt us? And the answer is no, grass spiders are harmless to us humans. What a relief!

As noted above, grass spiders build their webs in the shape of funnels, giving them their other common name, Funnel Web Spiders. (These are not the same as the Funnel Web Spiders found in Australia, which are much bigger and nastier.)

The spider hides in or near the “den” at the base. Since the web isn’t sticky, it’s used more as a warning system. A hapless insect, another spider, or other small creature that stumbles onto the surface sets off vibrations, announcing dinner. The predator then rushes out to pounce on the victim. Venom is used to paralyze the prey, which may be sucked dry now, or wrapped in silk and saved for later, like this bee. Lovely.

Late summer and early fall is when we most notice grass spiders. Normally happy to live outside, they respond to dropping temperatures by seeking shelter—such as in our houses. In fact, they’re the most common spiders found indoors, at least here in Colorado.

Unfortunately for then, moving into a house doesn’t save them. The spiders don’t live long enough to survive the winter. Instead, they leave behind an egg case that will hatch in the spring. Since spiders are an important pest control in our gardens, I guess that’s a good thing.