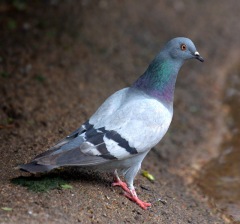 When we think of non-native birds, the Big Three usually come to mind: Rock Pigeons, European Starlings, and House Sparrows. All three are major nuisances, threatening native species, eating our harvests, and causing millions of dollars in property damage every year. But these aren’t the only aliens among us. In fact, there are nearly one hundred imported bird species that have established breeding populations here in the United States.*

Polly is a Problem

Many birds kept as pets have ended up in the great outdoors where they have set up housekeeping on their own. Weslaco, Texas is famous for its noisy flock of wild parrots, and parrots are found in many other cities as well—including Los Angeles, San Francisco, and even New York. While many residents love seeing these colorful birds, and birders are delighted to add them to their North American lists, some of these species are creating problems. For example, Monk Parakeets in Florida have a penchant for building huge nests on utility poles, shorting out the wires and causing outages.

Parrots are by far the most common feral birds, but they’re not the only ones. Red-whiskered Bulbuls, Java Finches, Indian Hill Mynas, and Spot-breasted Orioles have also established wild populations, mostly in Florida. At this point, numbers are small enough that little impact is being recorded. However, some of these birds are breeding rapidly enough to raise concern.

Game Birds
In a never-ending quest for more targets, hunters have imported a number of game birds to North America. Some populations struggled or died out—the Himalayan Snowcock, introduced in the 1960s, is still restricted to a small range in the Ruby Mountains of Nevada—but other species made themselves at home and multiplied. Chukar and Ring-necked Pheasant (also known as Common Pheasant) are two familiar examples.

Other native species have been moved around within the United States. Gambel’s Quail are native to Arizona and New Mexico, but they were introduced to western Colorado. There they are easy to spot near Grand Junction and in Colorado National Monument. And Wild Turkeys, not native to Oregon, were introduced for hunting in 1961.

Do these exotic game birds affect the ecology of regions where they are released? One study showed that landowners will plant trees and shrubs to provide cover for pheasants, inadvertently increasing suitable habitat for native songbirds and other wildlife.

On the other hand, “In areas where introduced pheasants have naturalized successfully, researchers have documented incidents of nest parasitism of native birds such as wild turkeys, waterfowl, greater prairie chickens, ruffed grouses, and blue-winged teals…. Pheasants have also been found to pass diseases to other bird species.**

Since that time they have literally exploded across North America. They are now found in most states, including Alaska. It’s easy to assume that such an adaptable species must be thriving at the expense of our native doves, Mourning Doves in particular. Are they?

Early studies in Florida produced surprising results. Instead of harming native dove populations, the Eurasian Collared Doves appeared to be helping them! Areas supporting high numbers of Eurasian Collared Dove also had more Mourning Doves, Common Ground Doves, White-winged Doves and Rock Pigeons. Of course, this is in a sub-tropical environment, not representative of the rest of the country.

More studies are needed to see in the new doves out-compete the natives in areas with more limited resources. One laboratory experiment concluded that Mourning Doves and collared doves prefer the same foods, but are equally aggressive. It will be interesting to see how that plays out in nature.

What Should I Do?
Humans seem to make a habit of rearranging the planet, usually with unanticipated results. Even with laws in place, stowaways and accidental releases continue to add to the confusion. And once a species is well established, it’s pretty much impossible to go back to the way things were before.

The best we can do is to monitor the spread of new birds and try to mitigate the damage. Birders can help by participating in citizen science efforts such as Breeding Bird Atlas surveys, bird counts, Project FeederWatch and iBird.
_____
*http://www.aphis.usda.gov/wildlife_damage/nwrc/publications/05pubs/avery053.pdf
**http://www.humanesociety.org/assets/pdfs/hunting/pheasantreport_02_07_rev.pdf