Time was running out. I had one more day of birding paradise, and too many options remaining. Should I go to Santa Ana National Wildlife Refuge? Salineno, a 90 minute drive up the valley, was reporting Brown Jays. Maybe we should head there. Then I overheard someone mention that a Black-vented Oriole was hanging around the feeding station at Bentsen-Rio Grande Valley State Park, just 20 minutes from our motel. The decision was made—I’d be chasing another lifer.

We were up with the sun, arriving at the park before the rangers opened the pay station. You have to park at the entrance and walk in—and that’s when we learned there was one minor detail we hadn’t considered. Bentsen is a fairly large park, encompassing more than 1,300 acres. Normally, a free shuttle runs around the park loop, stopping frequently to let people off and on. However, it was Monday. Due to a budget shortfall, the tram did not run on Mondays. I would have to walk.

I enjoy hiking, but lugging over 20 pounds of camera gear around the park all day didn’t excite me. Still, I wanted to see (and photograph) those birds. So off I went.

Happily, I didn’t have far to go to the first feeding station. It is a huge boon to birders that the parks and refuges keep these stations stocked with sunflower seed, peanut butter logs, and citrus fruit. The birds have become habituated to the gawkers with the binos, and you can get great views.

As I walked up to the bench, several other birders were pointing at the branches to my right. And it was that easy. The Black-vented Oriole was hopping between the shelter of the foliage and the peanut butter feeder out in the open. I happily set up my tripod and started taking pictures.

Realizing that this may be my only opportunity to observe this Mexican bird, I spent a while just watching its behavior, noticing its markings, and just enjoying myself. Then it flew off to digest its breakfast, and I started paying attention to the other birds in the area. 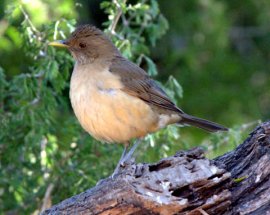 Like the other sites we’d visited, this one was well stocked with the standard Rio Grande birds: Green Jays, bright red Northern Cardinals and orange Altamira Orioles. Plain Chachalacas and Great Kiskadees made a ruckus. Northern Mockingbirds were abundant. So were Golden-fronted Woodpeckers (top) and Orange-crowned Warblers. Scouring the ground under the feeders were White-tipped and Mourning Doves, and…. Those are Clay-colored Thrushes! Called Clay-colored Robins until recently, the thrushes are the national bird of Costa Rica. I hadn’t seen any on my trip five years ago, but now I was seeing at least a dozen. Another lifer for the morning!

It fascinates me how birds that are common some years can be almost completely absent in others. The thrushes weren’t the only bird I had missed on my earlier trip. In 2007, everyone had commented on the absence of Buff-bellied Hummingbirds. This year there were plenty. I’d only seen one Olive Sparrow last time, but this time we saw them all around the feeders at Laguna Atascosa NWR. Perhaps the drought currently plaguing Texas has something to do with it. Birds used to finding water in the wild are more likely to appear at the parks’ water features. Food is more scarce too, bringing more birds to the feeders. Whatever the reason, I was certainly grateful to be filling in the gaps on my life list!

I hoisted my gear and headed farther down the road. A grassy picnic spot yielded a Black Phoebe and a Vermilion Flycatcher. An old tree housed a snoozing Eastern Screech Owl. I passed bicyclists in bright colors and other birders with olive-drab shirts and floppy hats. Seeing a bench by yet another set of feeders, I plunked down mostly so I could rest my shoulder. A female cardinal was playing hide-and-seek in the bushes—here, gone, here, gone, he… wait a minute! I did a double take. I’d been watching a cardinal (I have photos of her to prove it), but suddenly I was seeing a different bird—a Phainopepla. What a treat!

It was time to head back to the entrance. My ever-helpful husband had run some errands and was calling to tell me he had my lunch ready and waiting. Since it was well past lunchtime, I reluctantly packed up my camera and headed back up the road. Even if you have to walk, Bentsen is a great birding destination!