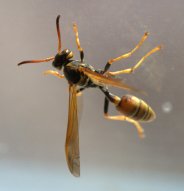 I’m sitting quietly at my desk as an unidentified insect makes an orbit around my head, buzzing aggressively. What in the…? It changes direction, aiming directly for my eyes. I want to flail at the bug, but realize that may not be a good idea, so I jump out of my chair and out of the way. Buzzzzzzz…. It finally lands on the wall and I get a good look. Yikes! It’s a yellowjacket!

Moments later, there are two wasps circling my screen, then three, and four. It seems that every yellowjacket in the neighborhood has somehow found a passage into my house, and they’re ganging up on me.

I know not to swat at them. When disturbed, they release a pheromone that sends out the message, “Help, send reinforcements!” That’s the last thing I need.

Yellowjackets are just plain ornery. Here in Colorado, “[t]he western yellowjacket is estimated to cause at least 90 percent of the “bee stings” in the state” (according to CSU’s fact sheet on “Nuisance Wasps and Bees”). The other stinging wasp in Colorado is a fairly new arrival, the European Paper Wasp. I blogged about it last year.

A house full of yellowjackets isn’t new. We’ve lived here for almost 20 years, and we’ve always had a few strays flying around during the warmer months. I usually ignore them, or just open a window so they can fly away. Amazingly, we’ve never been stung.

We found out why the wasps hung around when, in the process of replacing some windows, we discovered that a huge section of exterior wall was filled, not with insulation, but with yellowjacket nests! I thought that the wasps would leave once we rebuilt the walls, but they’re still here. They must be nesting somewhere nearby.

While our wasps moved into our walls to nest, most yellowjacket nests are underground. They’re built of paper that they make by chewing up wood or other paper products. (I was envisioning our wooden house collapsing, but happily they seem to have left our studs standing.) A single, fertilized queen starts the colony, and it grows steadily all summer, reaching hundreds of individuals by the time cold weather arrives.

The wasps are actually helpful to gardeners, since they prey on other insects. They’re also pollinators, an essential role and even more important now that honeybees are declining. I keep reminding myself of these facts, while warily watching the wasps circumnavigate my office. 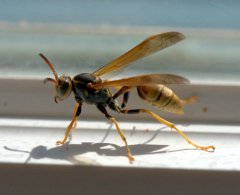 Now that fall is here arrived, I’m actually not surprised that the wasps are seeking out a warm place to hang out. Their days are numbered. With the exception of a few queens per nest, yellowjackets only live one season. The queens, along with a few males, are reared at the end of the season. They mate, ensuring next year’s generation. Then the queens leave home to find a safe place to spend the winter. The rest of the colony freezes to death.

I suppose I should be nicer to the condemned wasps gathering on the window, and on the walls near the ceiling, but I really don’t want to share my space with over a dozen cantankerous stinging machines. I’m going to go get the vacuum. Thankfully, my vacuum has a disposable bag, and the hose attachment should work just fine.