Question: I’m a birder and nature photographer living in Colorado, with a limited budget for travel. Where can I go for fun and photos at this time of year? 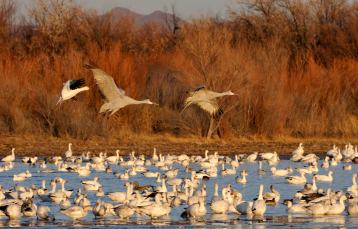 Just a day’s drive south of Colorado Springs, Bosque del Apache is the place to go for anyone interested in birds and/or photography. The week we visited, right after New Year’s, the refuge was home to 8,100 Sandhill Cranes, over 32,000 “light” geese, and a whopping 57,000 ducks! With such numbers, spectacular photos are pretty much guaranteed.

The weather had been cold when we left home, but the forecast for Socorro (the major town closest to the refuge) was for highs in the mid-to-high 40s. I packed my long underwear and threw some of those chemical hand warmers into my bag, but I didn’t expect to use them. I learned a lesson: Don’t believe the meteorologists.

It takes about a six hours to get to Socorro from our home, but that’s only if you drive straight through. We decided to stop at the Las Vegas National Wildlife Refuge, in northern New Mexico, to stretch our legs. I’ve been there before, and remembered it as a good place to photograph waterfowl. This time, the lakes were dry! It seems that with the ongoing drought, there just isn’t enough water to keep them filled. 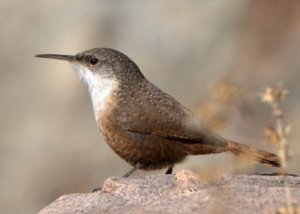 I took a short hike anyway, descending, then climbing, then descending again along a low canyon wall. The stream at the bottom was only partly frozen. The air was cold, and a stiff breeze made it colder. Being midday, I didn’t see much—a Canyon Wren posed for its portrait, a Townsend’s Solitaire called off in the trees somewhere, and a Roadrunner zipped by without pausing. Further down the auto tour road, I was able to grab some pictures of a Prairie Falcon before it flew off.

We arrived at Bosque del Apache, 20 minutes south of Socorro, just as it was starting to get dark. We drove through the entrance and headed for the Flight Deck, where eager photographers were gathered in anticipation of the fly-in. I got set up just in time.

Someone pointed to the north, and I realized that the dark smudge I’d seen on the horizon was actually the first of hundreds of skeins of geese. Within minutes, Snow and Ross’s Geese filled the sky, flapping madly to slow themselves as they landed on the water in front of me. I was sorry I’d set up with my telephoto lens, and there was no time to switch. (A back-up camera body would be helpful here.) 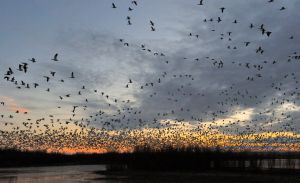 Most photographers come specifically for the evening fly-in of white geese, and the corresponding “fly out” in the morning. A sky filled with tens of thousands of birds silhouetted against the sunrise, mountains in the background, is an incredible sight. Even with a wide angle lens, it’s hard to capture the awe-inspiring sense of nature’s abundance.

As suddenly as it had started, it was over. The geese rearranged themselves more evenly across the shallow lake, the sun went down, and we packed up and headed for dinner and our motel. We’d be back before dawn, and we wanted to get some sleep before what promised to be a long, bird-filled day.

One thought on “Bosque Birding, Part 1”