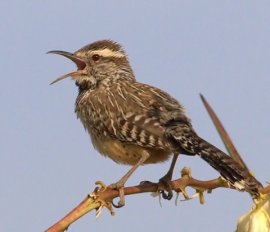 I admit it—I’m terrible at identifying bird sounds. They can screech and chirp and warble and coo all they want, and I have no idea who’s making the racket. Well, that’s not quite true. I do recognize really easy birds such as a Spotted Towhee, Canyon Wren, Swainson’s Thrush,  Townsend’s Solitaire, or Cactus Wren (right). I can identify a chickadee’s “chick-a-dee-dee-dee,” too, but I can’t tell a Black-capped from a Mountain without looking.

It’s all right to rely on my (rather poor) eyesight during the winter, when there are no leaves on the trees, but I miss too many birds the rest of the year—and if I do see them, I can’t identify them. It’s not from lack of trying. I can listen to a recording and try to fix it in my mind, but a minute later I have no recollection of what I just heard. I need help.

Happily, there are all sorts of useful ways to remember bird songs. To begin with, the chickadee isn’t the only bird that will tell you its name. How about a Killdeer, Phoebe, Towhee, Whip-poor-will, or Cuckoo? 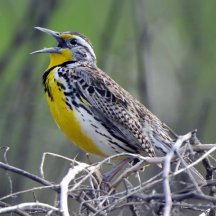 For those birds that are named after a different characteristic, some creative birders have come up other helpful hints. Robins wake us up with a cheerful “cheery-up, cheery-o, cheery-up, cheerily” Yellow warblers tell us, “Sweet, sweet, sweet, I’m so sweet” and Common Yellowthroats sing “wich-i-ty, wich-i-ty, wich-i-ty.” My (non-birder) husband claims this Western Meadowlarks is asking, “What’s that complicated sound?”

There are other ways that birds are named after their sounds. Catbirds meow, Warbling Vireos warble, and Whistling Ducks whistle.

Learning bird sounds an essential skill; sometimes, it’s the only way to distinguish one species from another. Consider the Empidomax flycatchers. They sure look the same, especially when they’re sitting on a branch many yards away. Happily, they don’t sound the same.

The Willow Flycatcher goes “fitz-bew,” the Acadian orders pepperoni “peet-sah,” the Alder Flycatcher says “fee-bee-oh,” and the Cordilleran Flycatcher twits “pit-peet.” If you hear “chipit-brrk-grrip” it’s Hammonds, and “chiirip-greep-pweet” is a Dusky. (Of course, we can also use other clues, such as habitat and range.) These mnemonics are convenient—until fall migration, when they’re out of habitat and range, and not singing.

The problem comes when we try to write down a series of chirps, whistles, and warbles as words. It just isn’t very accurate. One person’s “pit-peet” is another’s “ps-SEET, ptsick, seet!” Plus, birds don’t always sing their entire song, making it even harder.

If you aren’t familiar with the actual sound, these mnemonics can be pretty useless. Living in the west, I’d never heard a Whip-poor-will. Thinking in terms of how I would say the phrase in English, I assumed the accent was on the “whip.” When I finally heard a recording (I still haven’t heard the bird in person), I was astonished to learn that it’s actually “whip-poor-WILL!” instead. It seems that these memory-joggers are more helpful when you know the possible sounds but you need to tell one bird from another, as with the flycatchers.

I’m hopeful that with more experience, I’ll finally learn most of the common birds. I guess I just have to do a lot of birding, hopefully with someone who has a good ear!