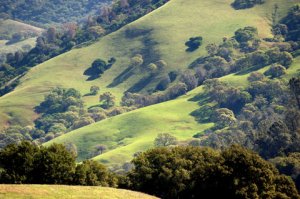 As birders, our goal when going birding is to see—birds! We may or may not have a target species we’re seeking, but a trip is generally rated as a success or a dud by the number of species we see. Rarities are a bonus.

But there’s another part of birding we might overlook. Just being out in the field means we have a shot at seeing other aspects of nature. Wildflowers and insects (especially butterflies and dragonflies) are garnering much attention these days, and for good reason. They’re just as interesting as birds, and more of a challenge. (Have you ever tried ID-ing a moth or beetle?)

I once took a memorable trip to Yellowstone with a good friend who had studied meteorology and glaciers. Between my interest in plants and animals, and her interest in rocks and clouds, we ended up stopping every few minutes to take pictures and learn from each other. What a blast!

Pete and I just got back from another trip, to northern California this time. While he attended meeting after meeting, I was able to spend lots of time hiking, birding, and taking photos. While I saw, and photographed, plenty of birds, I was delighted to run into an assortment of other animals as well. Here are the highlights. 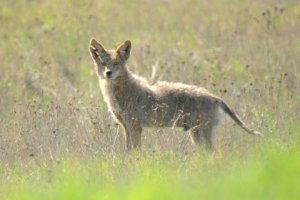 We have coyotes on our property in Colorado, but it’s hard to get a good look. They haunt our chicken coop (which is now built like Fort Knox), but disappear into the trees as soon as they see me.

I was hiking in Mt. Diablo State Park, on the east side of San Francisco Bay. It was a gorgeous day, as a March day in California often is, 68° with a gentle breeze, green grass, blue sky.  I had my lens focused on an Anna’s Hummingbird, squeezing off shot after shot, when I happened to look up. There was a coyote a dozen yards in front of me!

Without time to readjust anything, I swung my camera around on its tripod and started taking pictures. Amazingly, some were in focus. After a moment in which we eyed one another, the coyote turned and trotted off down the trail and into the oaks. Spectacular! 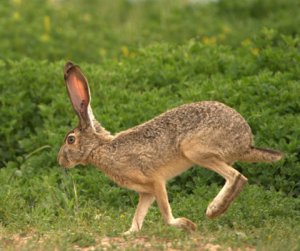 A few days later—right before Easter—I was on the other side of the bay, birding Shoreline Park in the city of Mountain View. Again, I was focused on the birds—scores of American Avocets in their breeding finery, Black Skimmers (ahead of schedule this spring), California Towhees fawning for a prospective mate. Something moved in the bushes next to the towhees. There, I see… ears? Ears!

Squirrels and Lizards and Deer, Oh My 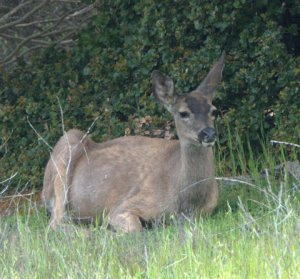 Pete took a day off and we met another friend for birding and chitchat at Steven’s Creek County Park and the nearby Prichetti Open Space, nestled up against the coast range behind Cupertino. I headed off on a stroll, passing Golden-crowned Sparrows and the Prichetti Winery. Under several huge live oaks I stumbled upon a couple of mule deer. Unconcerned, one continued to browse while the other remained where it had probably spent the night, nestled in the grass on the hallowed ground under the trees. 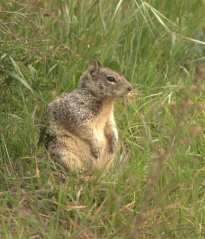 I had heard that Rufous-crowned Sparrows were hanging around Santa Teresa Park, in the Almaden Valley of southwest San Jose, so I headed over there for a look-see. By the time I arrived the day was half spent and the sparrows were long gone. However, some friendly California Ground Squirrels were hanging out in the grassy scrub, each one king of his own miniature realm. They didn’t seem to mind the birder tromping by with camera and tripod any more than they were bothered by the mountain bikers sharing the trails with me.

Lizards warmed themselves in the noon sun, doing pushups or taking a mid-day siesta. Most scurried away at my approach, but one was too comfortable—or too sleepy—to move, and I scored a photo. (I’m afraid that lizard identification isn’t one of my skills. Anyone know which species this is?)

I enjoy the prairie dogs, fungus beetles, foxes, badgers, butterflies, elk, raccoons, pronghorn, chickarees, and everything else nature chooses to share with me every bit as much as the birds. Maybe, instead of going birding, we should say we’re going “nature-ing”!