A pair of Great Horned Owls recently decided to nest in a tree at a major intersection here in town. Not smart. Still, their choice of nest spots provided their growing family with an ever increasing number of fans… and tons of harassment. It’s unbelievable what some people will do. You can read the whole horrendous story* in our local paper. It makes one wonder about the intelligence level of our population.

The caution sign was largely ignored—people were much too close. Some idiots were poking the twiggy structure with sticks, trying to make the parents fly. Others were climbing the tree. In fact, families sent their small children up the tree for a peek into the nest! Don’t they know that the owls are dangerous?

Great Horned Owls are large birds, about two feet tall. They have sharp beaks and even sharper talons—and the will to use them, especially to protect their young. The fact that no one has been mauled speaks to the birds’ patience. Eventually it has to wear thin, and someone will get hurt.

All owls are protected by a law known as the Migratory Bird Treaty Act of 1918. It’s illegal to disturb the nest any native bird without a permit. The U.S. Fish & Wildlife Service is responsible for administering this Act. While the law is not often enforced, penalties are severe: up to six months in jail and a fine of up to $15,000. Maybe fining some of these gawkers will instill some sense into our situation! 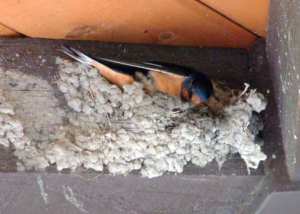 While most of us don’t have Great Horned Owls nesting on our property, we may find ourselves playing host to other species. House Finches are well known for making their nests in an assortment of odd and inconvenient places—wreaths, light fixtures, BBQs, and the like. Swallows stick their mud homes up under our eaves (right), and rain down droppings on unsuspecting heads passing by. What is the beleaguered homeowner to do?

A recent web search on “nuisance nests” turned up some pretty horrific advice, from trapping the birds (illegal) to getting a couple of outside cats! The topic of cats required more space than I care to give it here, but let’s just say that letting these unnatural predators roam is cruel and inhumane, both to the cats and to their prey. I have strong opinions on this one!

Since we can’t remove the nests once the birds are raising their families, the obvious solution is to prevent them from nesting in objectionable places in the first place. For cavity nesters (such as House Wrens), provide a proper nest box as an alternative. Robins will occupy a simple L-shaped ledge. House Finches can be enticed by the beginnings of an artificial nest.

Physical barriers almost always work. If birds are building nests in your garage, close the door. If swallows start sticking mud to your eaves, screen them out. (You might leave them access to a more out-of-the-way spot so you can enjoy watching them nest and raise their young). Remove a door wreath for a few weeks while House Finches are scouting out home sites. Prevention is by far the most preferred approach.

I suppose that some people are annoyed by nesting birds. It’s not true that bird mites can infest humans, but their droppings can carry diseases, not to mention the mess they make. No one enjoys being attacked by nesting blackbirds defending their territory. And when a House Finch nest clogs the dryer vent, we may be forgiven for being a bit steamed. (If done carefully, a House Finch nest may be moved. Relocated it to a sheltered spot nearby and the parents will carry on as if nothing had happened.)

It helps to remember that the birds only nest for a short while. Practice patience. Once the young have fledged, you can remove the vacated nest and block the spot to make sure they don’t nest there again.

Meanwhile, pick up a field guide and learn something about your uninvited house guests. You have a front row seat to one of nature’s premier events.
_____
* Here’s the conclusion of the owl story: Police were dispatched to the street corner to control the crowd, keep people back from the owls, and remove spectators from the middle of the busy intersection. Citations were issued for obstructing traffic.

Then, realizing that the owlets would soon fledge and be flopping around on the ground, the DOW moved them to a local raptor rehabilitation center, to be released when they are able to fend for themselves. The parents were left on their own, surely wondering what had happened to their family. Finally, the nest was removed. Great Horned Owls do not build their own nests, preferring to make good use of an abandoned hawk nest. It’s unlikely they’ll try to raise a family in the same spot next year.

You can see how they’re doing here.