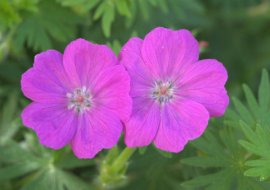 We’re all familiar with the iconic red geranium in a window box or flowerpot. While they live on indefinitely in warmer climates, a hard freeze turns the succulent stems into mush. However, there is a whole group of other geraniums that are completely hardy here in Colorado. Not only are they perennials, they’re also well-behaved, drought tolerant, have neat, attractive, compact foliage, and beautiful flowers. Interested? 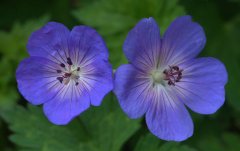 Hardy geraniums are “true” geraniums, in the genus Geranium (who says you can’t learn Latin names?). The frost-tender “flower pot” geraniums are actually in the genus Pelargonium. They’re all in the same family (Geraniaceae), so you could say they’re first cousins. 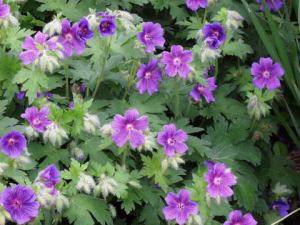 A number of Geranium species are native to Colorado, such as the various Cranesbills and the wildflower geraniums. The ones we grow in our gardens are largely hybrids or cultivars of various species (G. sanguineum or G. cinereum, for example), selected for their larger flowers and wide range of colors—white through pink and fuchsia to periwinkle blue. One of the most popular cultivars is ‘Johnson’s Blue’ (left).

Geraniums are easy to grow in full sun to partial shade, in any decent soil. Depending on the cultivar, the flowers can be nestled in the foliage or held above it on thin stems (as in the photo below). As I mentioned above, they are well-behaved, making them good companion plants. 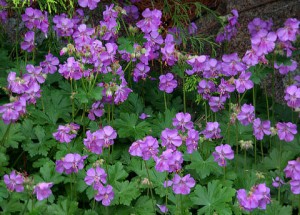 I have an east-facing corner by my front door. It was already landscaped with several low-growing Oregon Grape (Mahonia) and a luscious raspberry-pink daylily. I was wracking my brain, trying to select some flowering plants for the foreground that would tolerate the hot morning sun and afternoon shade, while not using too much water (the area is a mid-water zone). Several years ago I picked out three Geraniums with blooms to complement the daylily, and it worked so well that I plan to add a couple more. 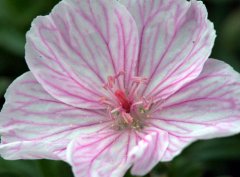 While Pelargoniums are subject to several insect pests and diseases, true Geraniums aren’t bothered by either. They’re not often bothered by deer or rabbits, either. If I had to find something to complain about, it’s that the foliage isn’t attractive after it has died in winter (unlike some perennials that manage to look good even dead).

One thought on “The Other Geraniums”