To refresh your memory, here is the photo from August’s Bird Quiz. It was taken in Colorado during the month of May. Don’t read any further if you want one last chance to identify this bird. 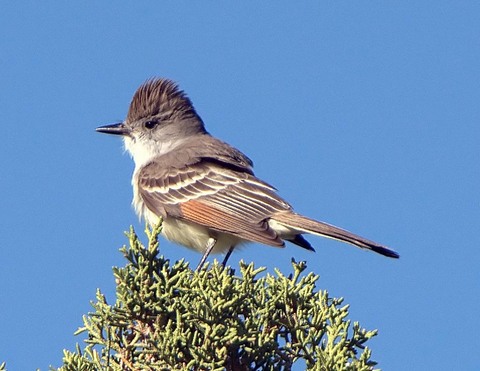 This is a pretty little bird we found sitting on top of a small tree near Cortez, in southwestern Colorado. It’s clearly some sort of perching songbird, so we’ll flip to the Passerine songbirds in the second half of our field guide and get to work.

One obvious characteristic that jumps out at us is the fluff of feathers on top of the bird’s head. They look as if they’re standing straight up. The beak is somewhat long and pointed, not a seed-eating beak. This bird probably dines on bugs. Also note the two white wing bars and the reddish hue below them. All these clues will come in handy as we ID this bird.

First of all, if you see a bird whose feathers give the head a somewhat squared-off shape (while lying down), or that form an arched poof when erect, it probably belongs to the family of Tyrant Flycatchers (Tyrannidae). This family includes the Empidomax flycatchers, pewees, phoebes, and the Myiarchus flycatchers, along with a few others.

As their name suggests, these birds catch flies, often by sallying out from a perch on a high branch to snag them out of midair. Frequently, they’ll then return to the same perch, another diagnostic behavior. What kind of beak is needed for grabbing flying insects? One that’s long and thin—that looks just like the one in the photo.

All right, we’ll go on the assumption that this bird is a flycatcher of some sort. Now comes the question, which one?

The Empids are a group of look-alike birds, with two white wing bars, a white eye-ring, and a dull shade of yellow-gray plumage. They’re extremely hard to tell apart, even if you have one in your hand. Thankfully, while our bird has the wing bars, it lacks the eye-ring, and is the wrong color. It’s not an Empid.

Size and color also eliminate most of the remaining flycatchers—the pewees, phoebes (which are distinctive and easily identified), and Vermilion Flycatcher (the males are bright red, the females are brown and peach), plus the  distinctive Rose-throated Becard and tiny Northern Beardless-Tyrannulet (which would also be far from home).

Kingbirds are also flycatchers, but they’re mostly quite large and chunky. Besides, Cassin’s and Western Kingbirds have bright yellow underparts while the Eastern Kingbird is black and white. It’s not a kingbird.

We’ve narrowed our options to where only the Myiarchus flycatchers are left. Sure enough, our bird looks a lot like these species. A look at the range map eliminates all but the Ash-throated Flycatcher, but we know birds like to roam. Can we be sure that’s what we have here? (Here’s a side view of the same species, taken a couple of years earlier.)

The Great-crested Flycatcher has a bright yellow belly, and our bird (from what we can see from the photo) does not. The Dusky-capped is also brighter yellow than the Ash-throated, and lacks the obvious wing-bars.

Brown-crested Flycatchers are the most similar. Unless they cooperate and sing us a song, we’re stuck looking at the bill and the shade of the feathers on throat and chest. The bill is larger in the Brown-crested. With nothing to compare our bird to, it’s hard to say if this bill is larger or smaller. The throat and chest feathers are a very pale gray on the Ash-throated (hence the name). Our bird does have a very pale throat, to the degree that it looks bright white in the sunshine.

All-in-all, it’s quite likely that this really is an Ash-throated Flycatcher. That was my first impression, and that’s what the expert birder leading our field trip called it. That’s good enough for me.