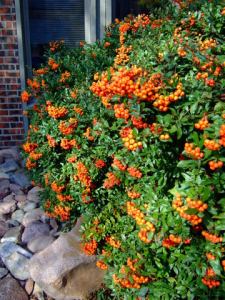 We’ve succumbed—an artificial tree, fake garlands, silk poinsettias. As I pull our Christmas bins out of storage, I wonder—how did a gardener stoop this low? Isn’t there something Christmas-y I can grow here in Colorado? It would be so nice to simply go outside and snip a few branches to grace our mantle.

While holly isn’t really adapted to our high and dry conditions, and the mistletoe growing in the Ponderosa pines differs from the pretty parasites of England, there is one plant that not only produces red berries in December, it’s one of the very few broad-leafed evergreens to survive in Zone 5!

Firethorn (aka Pyracantha) is a medium to large shrub in the rose family. They’re native to Eurasia, but do well in most of North America. Some cultivars are not reliably hardy much below freezing, but others can handle -20°F. and still look great. 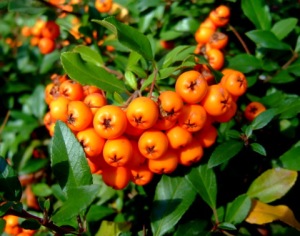 The leaves are oblong with slightly serrated edges, held on stiff, arching branches that also produce intimidating, spiky thorns. The clustered white flowers, which appear in late spring to early summer, resemble sprays of quarter-inch wild roses, with five petals and prominent yellow stamen.  These are followed by the berries (technically “pomes”) that may be yellow, orange, or red.

While birds and other wildlife relish these fruits, there is some controversy over whether or not the berries are poisonous. According to some authorities (such as Wikipedia [unfortunately, the reference was in German] and George Mason University) the berries contain Cyanogenic glycoside, which could cause vomiting, stomach ache, blistering of tongue, and diarrhea. Other authorities (such as Texas A&M and the FDA), claim that the berries are completely safe and edible. In any case, most people agree that they’re bitter, although there are numerous claims that they make a good jelly. 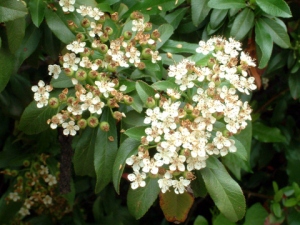 Plants should be situated in full or mostly-full sun, in “normal” amended garden soil. Once established, they’re reasonably xeric. Pyracanthas that fail to produce berries may be receiving too much shade, or the gardener may have inadvertently pruned off the flower buds the previous fall. While the shrubs may be sheared, you’ll sacrifice much of the season’s bloom and berries. Plants will look more attractive if pruned naturally by removing entire branches at their point of origin.

Like other plants in the rose family (such as apples), Pyracanthas are susceptible to a bacterial disease called fireblight, a major problem along the Front Range. Sterilizing pruning shears between cuts (with a bleach solution or rubbing alcohol) can help prevent transmission, but the plants can still become infected by pollinating bees. Scab, scale, and spider mites may also cause problems.

In spite of these problems, Pyracantha is an excellent choice for Colorado gardens. Along with providing food for wildlife, the dense, thorny shrubs offer protective cover for birds and small animals. The plants are deer and rabbit resistant (nothing is deer proof!), and the flowers attract bees and butterflies. Plus, any shrub that has green leaves and pretty berries in December wins a place in my garden!

One thought on “Colorado’s “Holly””