I was happily taking pictures of the flowers at Hudson Gardens last weekend when I noticed a huge moth siphoning nectar from the lilacs nearby. Looking up, I realized that there were dozens of these moths, fluttering around the catmint, hovering in front of the Red Feathers (below), and flocking (what do you call groups of moths, anyway?) around the lilac blooms. I started photographing them instead of the flowers. 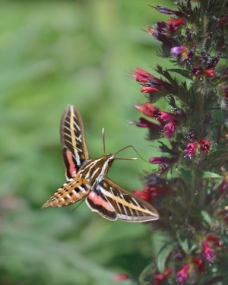 Three days later, I was at the Denver Botanic Gardens, and the scene repeated itself. Probably hundreds of moths swarmed the flower beds, reminding me of hummingbirds as they sipped nectar through their long proboscises. And that evening I realized they were all over my perennial bed at home, too.

A bit of research revealed that one common name for these hummingbird look-alikes is Hummingbird Moth. With their hummingbird-like feeding behavior and similar size, it’s easy to see how the name arose. However, they aren’t birds, but insects—sphinx moths in the family Sphingidae.

There are a lot of different kinds of sphinx moths (aka hawk moths)—around 1,450 species! One sphinx moth spends its childhood as the aggravating Tomato Hornworm, but the ones currently experiencing a population explosion here in Colorado are a different species—the White-Lined Sphinx Moth. These eat a variety of plants. A single caterpillar can quickly defoliate an evening primrose (one of their favorite snacks), and the female moth can lay up to 500 eggs at a time. Problems occur when large numbers of caterpillars hatch at once, as Eric Eaton describes on his blog “Bug Eric”:

…food plants can quickly become scarce as they are consumed, and the caterpillars are forced to “march” in search of literally greener pastures. These large scale “migrations” may cross rural roads creating a slick hazard as they are crushed under tires.

Given the number of moths I’ve seen lately, I’m surprised that none of my plants (or those in the public gardens I visited) appeared damaged. As a photographer, and given the caterpillars’ bright colors, large size, and distinctive shape, I’m actually disappointed that I haven’t noticed any. (Image left: Whitney Cranshaw)

Once fully grown, a caterpillar digs into the soil and creates a small space for itself. There it undergoes metamorphosis as a shiny, dark brown pupa. A few weeks later, the adult moth emerges to begin the cycle all over again. Because they live on nectar, adult moths don’t damage plants at all, and in fact may act as pollinators.

More than one generation per summer is possible, but if it’s late in the season the insect will overwinter as a cocoon, safe underground awaiting spring’s flowers.

I was astonished at how fast the moths beat their wings in order to hover. It took a very fast shutter speed to freeze the action. Then I was able to see how they scoop the air to generate lift.

Colorado’s Front Range is also currently being inundated by migrating miller moths, so it was a pleasant change to find a moth that was so interesting. I think their orange hind-wings look quite attractive against the lavender-purple catmint and salvia in my garden, and complement the similarly-colored red-orange of the Desert Eve yarrow I just planted.