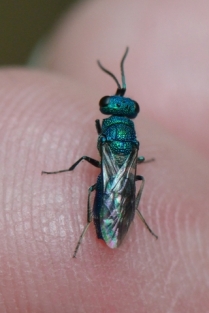 It’s 4:30, still dark, and the alarm clock rouses me from a deep sleep. Wha…?? Oh, right, I’m going birding. There’s lots of talk about the “early bird” for a good reason. Birds get up early. Even as I’m fumbling around trying to find some jeans and a t-shirt, I can hear a robin singing outside my bedroom window.

Last week, I went on a field trip that didn’t start until 9 am. Nine! No setting the alarm clock. No downing cup after cup of caffeine (and then realizing all the bushes are much too small to hide behind). I could have a leisurely breakfast and drive off in the daylight—and we still saw plenty of wildlife. How did we manage to see so much so late in the day? Easy. We were bugwatching.

In addition to the lovely fact that bugs get up late (they need the sun to warm them up), I found bugwatching to be a relatively relaxed pastime. There are insects everywhere you look. I doubt we hiked even a mile and we never got bored. 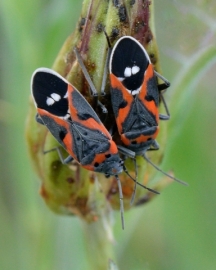 Except for the ones that fly, most insects and other arthropods tend to hang around the plant they’re chomping, or the rock under which they’re hiding, so you can take your time looking at (and photographing) them. That’s a good thing, because they’re also notoriously difficult to ID. In fact, if we hadn’t had two very capable entomologists as trip leaders, I wouldn’t have gotten much past “lady bug” (which turns out to be a “lady beetle” since they aren’t true bugs). Even then, there are a bunch of species to choose from; you have to count their spots to tell them apart. 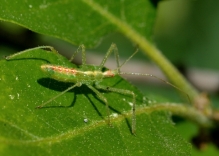 As it was, I was introduced to milkweed bugs (above), which were on many plants besides milkweeds, ferocious assassin bugs (left) who devour other insects for lunch, and tiny parasitic wasps (such as the Cuckoo Wasp, top) that are gardeners’ friends. I even learned that the annoying flies I thought were houseflies aren’t houseflies after all.

A lot of birders, having seen all their local birds many times over, have branched out into butterflies and/or dragonflies. They’re relatively large, as insects go, and they fly, which must feel comforting familiar to a birder. I like butterflies dragonflies well enough, too, but there’s so much more. The beetles are dazzling, often in metallic suits of armor. (The beautiful beetle larva shown here will become a dull black adult. ) So what if I can’t identify them all. Most of us don’t have the time to remember the details an order (Coleoptera) that includes 40% of all insects. 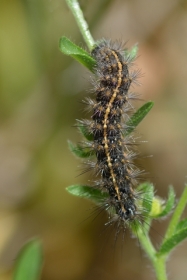 As I was snapping photos of this beautiful caterpillar (left), I asked what kind of moth or butterfly it would eventually turn into. Neither of our trip leaders knew. And when I asked why most insect field guides lack the larval forms, I learned that it’s because no one knows what many of the larvae look like!

It turns out that scientists have named 350,000 species of beetle, but they estimate that the actual number is over a million. I love the idea that even an amateur beetle-hunter like me could possibly discover a new species, and make a significant contribution to science. 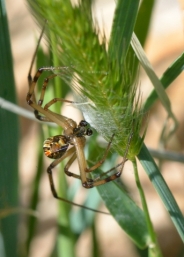 We didn’t just see insects. A brown spider spinning a web turned out to be a male black widow. Who would have guessed? And the web he was spinning wasn’t to catch dinner in, but rather to temporarily hold his sperm so he could transfer them from his male sex organs to his palps (appendages near his mouth), with which he would inseminate a female. Fascinating! 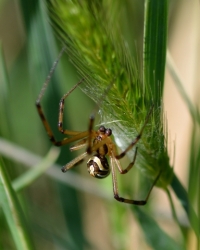 I know some birders who are making an intensive effort to see every one of the approximately 10,000 bird species, or at least a representative from each of the 223 bird families. I wish them all the best, but I don’t have that kind of time, energy, or financial backing—or interest. On the other hand, with millions of species and more being discovered all the time, there is no way anyone could see every insect. That takes the pressure off—no life list. I did make a few notes, but only so I could learn some common species and properly label my photos.

I plan to go bugwatching again, hopefully soon. With a little more practice, I could just go right outside my door. I’m sure there is enough life in my grassy field to keep me occupied for many summers to come. Who wants to come? Instead of being birders, we could be buggers! Er, I mean…