To refresh your memory, here is the photo from September’s Bird Quiz. It was taken in Oregon during the month of September. Don’t read any further if you want one last chance to identify this bird.

Let’s start with location. As I mentioned, this bird was seen in Oregon. From the sand, you might guess that I was at the beach. You would be correct. On the other hand, this doesn’t look like a typical shorebird. With its markings, beak, and legs, it’s clearly not a gull or sandpiper. I should mention that I saw a large variety of birds in this spot, including Song Sparrows, warblers, Ruby-crowned Kinglets, crows, and raptors. Not every bird at the beach is in the front half of our field guide!

Now let’s look at the markings. It’s a pretty nondescript individual—buffy brown-orange and white, with dark gray stripes and an indistinct wing bar. I admit that it’s hard to see detail in this photo, but that was as close as I ever got to the bird. Such is life. Here’s another picture, cropped a bit closer:

Now we have a better view of the light buff throat with the necklace of stripes. The white eye rings are clearly visible, too.

From both of these photos, you can see that the bird has what I call a svelte figure. It’s not chunky, or sturdy, but rather slim and pointy. The legs are dark.

Finally, look at the beak. It’s straight and thin, not curved like a wren or thrasher, nor is it the wedge-shaped bill of seed eaters such as sparrows and finches. That’s significant, since most “little brown jobs” fall into one of these categories.

At this point, if you aren’t familiar with this family of birds, the only recourse is to start flipping through the field guide. That’s not much fun, but it’s how we learn.

The standard “bird” shape sends us to the Passerines, or song birds, found in the back half of our book and starting after the woodpeckers, with the Tyrant Flycatchers. Remember, we’re looking for a slender bird with buffy, black, and white coloring, stripes, a wing bar, a thin straight beak, black legs, and an eye ring.

There are a number of species with brown juvenile coloring. One of the tricky aspects of birding late summer is the abundance of young birds that look nothing like their parents. Be sure to check for juvenile plumage as you go.

As we turn the pages, the first birds that come close are the thrushes. The eye ring matches, and some thrushes are mostly brown and white. But none of the thrushes have the wing bar, and they all seem much fatter, with big toddler bellies. It’s not a thrush.

Next we come to the pipits. The National Geographic illustration shows a very orangey American Pipit. The bill matches, the stripes are in the right place below the throat, and the eye ring is clearly visible. That might be a faint white wing bar below the black feathers. Checking Sibley, his American Pipit is much paler, and the wing bar shows up better. In fact, Sibley’s bird is a perfect match for ours.

Interestingly, I’ve also seen and photographed this bird in the mountains of Colorado, far from any ocean. They’re abundant near the summit of Mt. Evans, next to Summit Lake. That’s significantly above the tree line. These photos from Mt. Evans shows the fine lines on the back, another diagnostic feature. Note that the legs on these birds are much lighter, a peachy color. The leg color varies among different populations and at different times of year. So, not all pipits have dark legs, but many dark-legged birds are pipits. Got that? 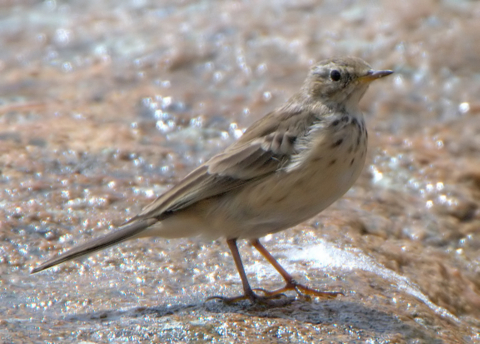 Pipits aren’t strictly shorebirds, but they do prefer to be near water, either salt or fresh, on the tundra, or in open fields. They breed in the Rockies and on the northern tundra, then winter in the southern states and south. Look for them during fall migration.