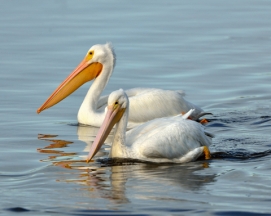 What do you do when you can’t go birding? After 21 years in the same house, my husband and I are moving. The goal is a smaller house, less upkeep, and more time for birds and photography. But in order to reach that goal, we have a lot of sorting and selling and donating to do. So, instead of strolling down the trail looking for winter songbirds, or driving across the prairies looking for raptors, I’m prowling around the house trying to find an object that will fit perfectly in that space left in the moving box I’m filling.

Trust me, it’s nowhere as much fun. 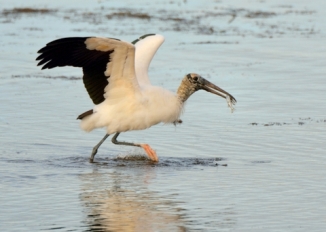 Since I have my hands full, I’ve had to bird vicariously for the past few months. One way I’ve been doing that is reminiscing about trips we’ve taken in previous years. For example, one year ago this month I was happily photographing Roseate Spoonbills, Wood Storks (left), various herons and other waders at the J.N. “Ding” Darling National Wildlife Refuge. Thinking about the birds we saw and looking at the photos I took isn’t as good as being there, but it’s sure better than moving! 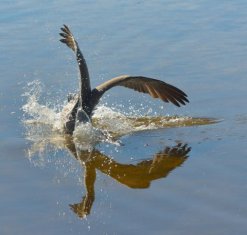 Located on Sanibel Island, on Florida’s west coast, Ding Darling NWR is one of my favorite spots to go birding. It’s named after Jay Norwood Darling, who convinced President Truman to create the refuge. Its 6,400 acres include hardwood hammocks, cordgrass marshes, submerged seagrass beds, and part of the largest undeveloped mangrove forest in the U.S. About 2,800 of those acres are designated a Federal Wilderness Area. The refuge bird list currently stands at 245 species.

I’ve been there twice, both times in January (a good time to not be in Colorado). It turns out that January is an excellent time to visit, as many migratory birds winter at the refuge. 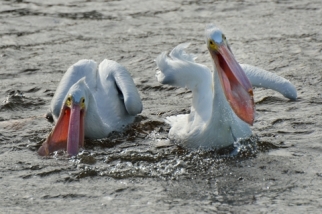 Try to arrive at low tide, when a vast expanse of exposed mudflats draws shorebirds and other waders close to the road. At any time, Brown Pelicans (above, right) put on a wildly entertaining show with each ungainly plunge, while American White Pelicans (right) team up to “herd” a school of fish into their gaping bills.

Songbirds are a bit harder to find, but try searching among the large shrubs and brush along the various trails, especially early in the morning. Ospreys and other raptors soar overhead, shorebirds (such as this Willet, left) comb the mangrove edges and beaches, while gulls and skimmers patrol offshore. 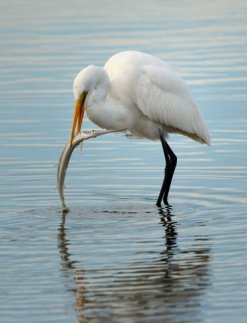 Photographers may find that it’s difficult to get good lighting on the birds. Most of the closest birds hang out south of the road, which means you’re shooting into the sun, especially in late fall and early winter. Morning, when the sun is in the east, is marginally better. Try to be there when the refuge opens at 7:00 am. Hopefully, the tide will cooperate as well.

The weather during our visit last year was heavily overcast, a side effect of the infamous Arctic Vortex meeting Florida’s warm, saturated air. It was disappointing, but since I couldn’t change it, I looked for close-ups (such as this Great Egret, right) and shots that would work well in black and white.

Since you can’t go out on the mudflats, a long lens is essential. Even then, the spoonbills (left) look like little pink specks in my photos. And as the refuge is also open for fishing, expect to work around non-birders. Finally, don’t plan your visit on a Friday. The refuge is closed in order to give the wildlife a break from us gawkers.

If a trip to Florida isn’t on your calendar—or, if like me, you’re too busy to get away right now—there’s another option. The refuge has a live webcam feed, so you can watch the birds from your computer. You won’t even need binoculars.

One thought on ““Ding” Darling Dreams”