To refresh your memory, here is the photo from February’s Bird Quiz. It was taken in Florida during the month of January. Don’t read any further if you want one last chance to identify this bird.

This one starts out easy. We see a hooked beak (obviously a predator of some sort), a large, round head with big eyes on the front of the face, and an upright stance…. Even non-birders should recognize this as some sort of owl, so let’s start there.

While ornithologists divide owls into two families (Barn Owls and Typical Owls), and numerous genera, I find it easier to look at some obvious field marks. 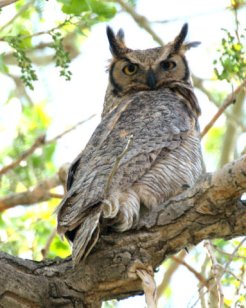 First, does it have “ears”? Of course, all owls have ears—holes in their heads that let them hear sounds. In fact, their hearing is excellent and they use it to find their prey. Rather, what I’m referring here to are the little feather tufts that stick up like ears on some owl species. It’s usually quite obvious if the owl has them or not, as you can see on this Great Horned Owl (right).

The next obvious characteristic is size. While it’s normally extremely difficult to estimate the size of soaring raptors, owls a different matter. They usually sit in trees or fly low to the ground. Here in Colorado, a large owl is easily identified as a Great Horned Owl because no other owl is that big.

From our photo, we can see that this owl does not have feather “ears.” That eliminates the Screech-Owls and the Long-eared Owl. Size is harder to see in a photo with no reference points. Now what?

I mentioned that the photo was taken in Florida, so for now, let’s eliminate species that are not found there in January. While birds do stray, it’s helpful to start with the most likely suspects. If nothing quite pans out, then we can look further afield.

Simply eliminating eared owls and restricting the list to owls that live in Florida in January, we’re left with only two species: Barred Owl and Burrowing Owl. In the field, it would be very easy to tell these apart. One is usually in a tree, while the other is on the ground. One is a typical owl shape, while the other has long, sturdy legs. However, you’re stuck with the photo I took, and that doesn’t show anything about the habitat or location the owl is in. 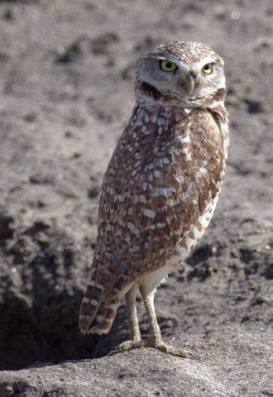 an’t see the neck on our owl, above—its head isn’t extended far enough. But we can see spots on the top of its breast. Its beak is mostly a silvery gray, not yellow. And look—yellow eyes!

Here is a photo of another Burrowing Owl, this one living in California. The two owl populations do not overlap, and the western birds are lighter in color.

That wasn’t hard at all, was it?

Was this too easy? I don’t want to frustrate beginners, but I don’t want to make it too easy for those with more experience. Therefore, next month I’m going to give you two quiz birds. One is harder than the other. Until then, happy birding!