To refresh your memory, here is the photo from June’s Bird Quiz. The bird was seen in Colorado during the month of June. Don’t read any further if you want one last chance to identify this bird. 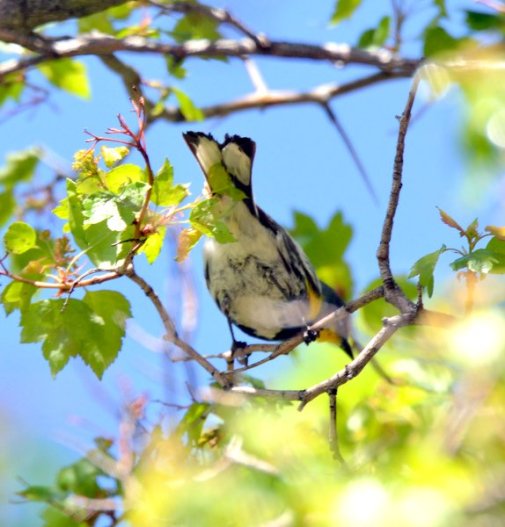 The world of birding needs a field guild that shows the birds as we actually see them—leaving in a hurry, hiding behind a clump of leaves, or, as in this case, viewed from underneath. Seeing a bird like this often leaves me clueless. Where are the familiar field marks? Are there wing bars? An eye ring? What color is the top of the tail, or the eye?

Yet, views like this force me to become a better birder. Lacking what’s familiar, I’m forced to take a closer look at the parts I usually ignore. In spite of the awkward angle, there’s a lot we do know about this bird.

For one, it’s a small, perching songbird (with a penchant for mooning birders). That rules out half the field guide—all the waterfowl, raptors, hummingbirds, woodpeckers, etc. We can also see the size, shape, and color of the beak, a huge help in narrowing down the options. In this case, it’s sharply pointed—the bird is an insect eater. Cross off the finches and sparrows—we’re getting warmer.

Another obvious feature is how the bird is colored. In addition to the striking black and white motif, there is yellow on the throat. Which birds have sharply defined black and white stripes, with a touch of yellow? A quick look in the field guide eliminates all but the warblers.

Now comes the fun part. I’m convinced that when God made warblers, he took a large handful of white feathers, a larger handful of yellow feathers, and threw in some black ones for fun. Once he had an assortment of birds arrayed in different combinations of these colors, he added a bit of blue here, chestnut brown there, and perhaps an orange crown or two—and called it a day. This is one reason why warblers drive me crazy.

The other reason has to do with where I live. My field guide’s chapter on warblers is full of beautiful birds, but they seem to favor the territory on the other side of the Mississippi River. Sure, we have warblers here in Colorado, and we even get an enticing assortment of vagrants (such as the Chestnut-sided Warbler I picked up a couple of weeks ago). But seeing them as rarities, hit or miss, isn’t helping me learn how to tell them apart. I knew a Chestnut-sided Warbler had been spotted long before I got a chance to go see it. Then, when I finally got to see it, there were three other birders already there. As we walked up they all pointed at the bird. I was delighted to get the lifer, but there just wasn’t any sport to it.

While most North American warblers have appeared in Colorado, the vast majority would be considered rarities, seen once or twice a season if we’re lucky. That should help us identify our bird, but I’ve been known to be a bit sneaky, so let’s consider all of them.

Which ones have the colors we need—black and white underneath plus yellow on the throat (and perhaps elsewhere)? Being generous, my list includes Cape May, Kirtland’s, Magnolia, Blackburnian, Prairie, Grace’s, Yellow-throated, Yellow-rumped (specifically, Audubon’s subspecies), Townsend’s, Golden-cheeked, and last but not least, the Black-throated Green Warbler. That’s a lot of species! Now what?

We can eliminate the Kirtland’s and Golden-cheeked Warblers because each of their ranges is extremely limited, and neither is anywhere near Colorado. That leaves nine possibilities.

I turn to my field guides. National Geographic doesn’t show the undersides of the birds at all, so that’s no help. Sibley shows the underside of the tails, so I quickly checked each species. Magnolia Warblers have much more black on the tips of their tails; Blackburnian, Prairie, Grace’s, Townsend’s, and Black-throated Green Warblers have much less.

Unfortunately, neither guide shows the bird from directly below it. (Here’s an opportunity for an enterprising individual—create a field guide that shows the undersides of the birds!)

We’ve reduced the list of contenders to Cape May, Yellow-throated, and Yellow-rumped Warblers. Let’s look at each one in turn. The Cape May male has a distinctive rust-colored patch around his eye. It should show up in the photo, even with the branch in the way. It’s not there. Also, Cape May Warblers are very much an eastern bird. It’s possible, but rather unlikely, to see one this far west.

Yellow-throated Warblers are mostly found in the East, but they do stray into Colorado. If we could see the whole bird, this wouldn’t be difficult. The photo gives the overall impression of a very contrasty, striped bird. These warblers aren’t all that striped—except on their sides. Without being able to see the rest of the bird, we just can’t tell quite yet.

Yellow-rumped Warblers are common cross much of the country, including Colorado, where they spend the summer and raise their young. They have a yellow patch on their sides. Our bird has some yellow below the side of its neck, but it’s difficult to tell exactly where on the bird it is. There are just too many twigs in the way.

We’ve come to a rather fuzzy conclusion. Our bird is most likely an “Audubon’s” Yellow-rumped Warbler. The Audubon’s subspecies has a yellow throat, while a Myrtle’s throat is white. It would be nice to nail it down a bit more firmly, so I’ll give you a hint.

I ended up taking another photo of this bird:

The yellow patch on shows up clearly on the bird’s side. We were right. (Also, I finally saw the famous yellow rump, but never got a photo of the bird in that position.)