To refresh your memory, here is the photo from July’s Bird Quiz. The bird was seen in Colorado during the month of July. Don’t read any further if you want one last chance to identify this bird.

What do we first notice about this bird? It only takes a glance to see that it’s small, gray and buffy/brown, and striped—in short, the ultimate Little Brown Job. Furthermore, the beak is triangular—that of a seed eater. While a number of species qualify as LBJs, most are either sparrows or wrens.

Wrens eat bugs, and have a scimitar beak built for the job. Sparrows eat seeds, like this bird (the picture on the right is the same individual, but posed so that you can more easily see the shape of its beak). We have to start somewhere, so we’ll start by assuming it’s a sparrow. If nothing seems to fit, then we can always go back and look for some other options. (Some other options include pipits, a female Indigo Bunting, Bobolinks, female and immature Red-winged Blackbirds, female and immature finches, and House Sparrows.)

I’ve been taught several strategies for sparrow ID, but I still struggle. If the field, when we may not get a good view, or a very long one, noticing the General Impression of Size and Shape (GISS) is probably the best bet. Each sparrow genus has its own unique characteristics—silhouette, beak to bird ratio, exact shade of brown, etc.—that gives us an immediate impression. Of course, to ID sparrows this way, you have to memorize the differences among all the genera. It’s on my to-do list, right after “delete surplus photos” and “enter rest of birds into eBird.”

Thankfully, this bird isn’t going anywhere, at least now that I’ve snapped its portrait. Therefore, I’m going to fall back on the easier to learn (but often harder to use) method of using field marks.

I start by noting whether the bird’s breast is plain, striped, and/or has a central spot. Our bird clearly has both a striped breast with a glaringly obvious central spot. (Note that since it’s July, this could be a juvenile sparrow, and many of them are striped when the adults are not. However, the central spot eliminates any confusion, as the only juveniles with spots also have them as adults.)

Only seven species have both spots and stripes, which narrows things down considerably. This leaves us with: Savannah and Vesper Sparrows, Seaside Sparrows (extremely unlikely in Colorado!), Fox, Song, and Lincoln’s Sparrows, and female and non-breeding male Lark Buntings.

The next, rather unusual marks I see are the stripes under the beak—on the bird’s “chin.” Most sparrows are white here. In fact, the only two species with striped chins are Fox Sparrows and Lincoln’s Sparrows.

Telling those two species apart is relatively easy. Fox Sparrows are large and stocky with a plain, gray to brown head and face. Their back is plain brown, but their undersides make up for that, being distinctly adorned with triangular brown spots that may or may not run together. I immediately recognized the Fox Sparrows that I’ve seen (the Sooty subspecies in California and the Slate-colored species in Colorado).

Lincoln’s Sparrow is much more petite, with finer markings—just like the bird we’re trying to ID here. Their chest stripes have a buffy background behind them, so seen from the front, they appear to have a warm, pale copper cast. In addition, the two stripes on the top of the head are vibrant copper. (I use this as a mnemonic, remembering that copper pennies have President Lincoln’s head on them.) To clinch the ID, there is yellow at the base of the bill. Here’s the same bird, hopping along the floating debris at the edge of the lake where we found it. 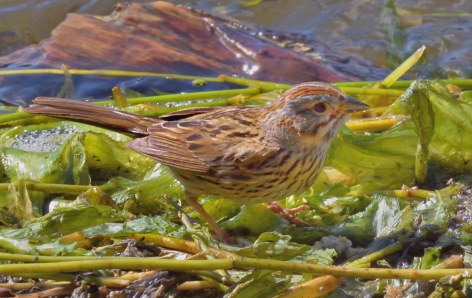 As a footnote, Sibley points out that Lincoln’s Sparrows are…

somewhat secretive and inconspicuous. Nests in damp dense brushy areas in sunny clearings, such as will and alder thickets, margins of bogs. Winters in grassy patches around brush and trees, often near water.

This bird was mainly skulking in the willow thickets surrounding Echo Lake, which is just before the entrance to the toll road to the top of Mt. Evans. Do you think he read the description in the field guide?