To refresh your memory, here is the photo from August’s Bird Quiz. The bird was seen in Colorado during the month of August. Don’t read any further if you want one last chance to identify this bird. 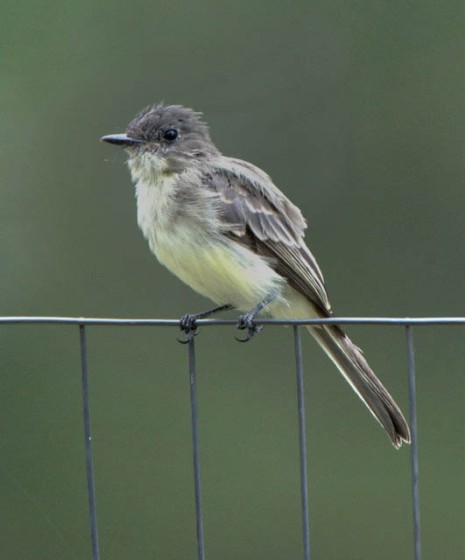 The first step in identifying this bird is to know where in the book to look. New birders in particular may be stumped—it’s not a robin or a striped sparrow, or any of the other familiar birds we learn in the course of growing up. Yet, it is a perching bird—a songbird—which sends us to the back half of the field guide. That’s a start.

This bird’s color combo gives us the next clue. There’s a group of mostly small to medium-sized Passerine songbirds that often have yellowish fronts and dull gray or brown backs, and perhaps some wing bars—the Tyrant Flycatchers. (You can find them in the field guide at the beginning of the Passerine section, right after the falcons and parrots.)

There are several genera in the Tyrannidae—Sayornis (Phoebes), Contopus (Pewees), Myiarchus (some flycatchers), Empidonax (a number of nearly identical birds), Tyrannus (Kingbirds), and a few with only one North American species in each, such as the Great Kiskadee, the unmistakable Vermilion Flycatcher, and the diminutive Northern Beardless Tyrannulet, whose name seems longer than its wingspan!

Which genus does our bird fall into?

Kingbirds are large, sturdy birds with impressive bills. I can easily imagine them nabbing a grasshopper in mid-flight. Their posture is distinctive—they look like they’re about to lunge at some prey. Some are quite brightly colored while others are more of a monotone. There are two very easy-to-recognize Tyrannus birds—the Scissor-tailed Flycatcher and the rarely accidental Fork-tailed.

Myiarchus flycatchers are also larger birds—more robin-sized—with more or less amounts of yellow, and rust on their tails and/or secondary flight feathers.

Empids are small with distinctive eye-rings and two prominent white wing-bars. They’re more gray than yellow (with the exception of the orange chest sported by the Buff-breasted Flycatcher).

Pewees are easily confused with the Empids. They’re slightly larger, with longer wings. They don’t flick their tail as the Empids do, and they come in slightly darker shades of gray. They tend to sit at attention, with an erect, upright posture. Both Empids and pewees have squared-off heads, sometimes with a bit of a crest similar to a titmouse or jay.

Finally, the phoebes are mid-sized between the larger kingbirds and the smaller Empids and pewees. Their heads are also pointed in back, with one exception: the Eastern Phoebe’s head is more rounded. There are three phoebes found in North America. The Black Phoebe is mostly black with white undersides. The Eastern Phoebe has a dark gray back and pale undersides (yellow in the case of juveniles), with an open gray vest. They “wag” their tails while perched. Say’s Phoebe is an easy-to-recognize buffy orange underneath.

Now, what is our bird?

Sitting on the wire fence, we can see that it’s a medium-sized bird. Its head is rounded. There’s no eye-ring, and the beak is on the smaller side. Those wings are slightly barred, but it isn’t a prominent feature. And finally, the belly is yellow, but there’s not rufous anywhere.

What do you think? The rounded head is a key feature, as is the size of the bird and the gray on the sides of the breast. Do you have it yet? 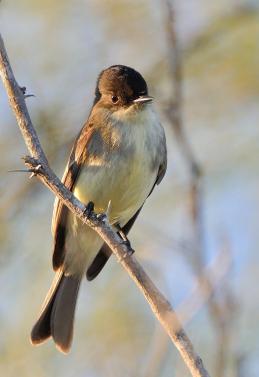 Yes, it’s a young Eastern Phoebe. Here’s another one, this photo taken in southern Texas, in the lower Rio Grande valley. Click on the picture for a larger image.

August is a tricky time to identify birds, as there are many young ones hanging around. Don’t forget to check the features of juveniles when you’re scanning through your field guide.

I was quite pleased to add this individual to my yard list (at our old house), as Eastern Phoebes aren’t regularly found this far west. Young birds are much more likely to wander, however, and this one found its way to our yard at the far-western edge of the plains.

One thought on “August’s Quiz: Answer”