After weeks of subfreezing weather, Saturday morning dawned with a promise of warm sunshine and blue skies. As the sun rose, we were already on our way, heading out onto the short-grass prairies. Pikes Peak receded into the rear view mirror. Our focus was on the trees and telephone poles along the road. Seven of us had piled into two cars, bristling with binos and telephoto lenses. It was time to photograph raptors!

The first challenge in any photo-bird trip is finding your subjects. We expected to encounter an abundance of Red-tailed Hawks, but were hoping for some other, less common species. Colorado is host to four Buteos—Red-tailed, Swainson’s, Ferruginous, and Rough-legged Hawks—along with Northern Harriers, various Accipiters, Falcons, and owls, and both Bald and Golden Eagles. The Sawinson’s Hawks are currently in Argentina, eating grasshoppers, but we had hopes of seeing most of the others.

With all eyes scanning the leafless branches as we drove past, it wasn’t long before we spotted our first bird. Not surprisingly, it was a Red-tail— a solid, darker mass amid the bare, brushy twigs. The bird’s pose left something to be desired, but we were eager for photos, so we pulled out the gear and started shooting. It’s hard to make a good shot from a bad composition. The pictures were… well… surely there would be more hawks ahead.

And there were. As the number of sightings mounted, we became choosier, only stopping for birds that were well-lit, and easy to see on bare branches or poles. The quality of the photos improved commensurately. 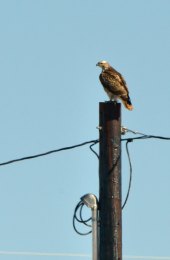 “What’s that, on the fourth pole down? It doesn’t look quite right for a Red-tail!” That’s because it was a Ferruginous Hawk, with a light head, light breast, light-to-pale red tail, and conspicuously russet legs. It allowed us to get quite close before taking to the air, but not close enough for the portrait I’d hoped for.

The day developed a rhythm. See a bird perched. Get close enough to shoot a photo. Catch the bird when it takes to the air, and then move on. We had firmly decided not to harass the birds by repeatedly intruding into their comfort zone.

This is when I ran into difficulties as a photographer. I am blessed with a 500mm telephoto lens*. Add a 1.7x tele-extender, and I can get some lovely detail in the birds I shoot (but still not from yards away). However, the set-up weighs a ton and requires a tripod, or at least a bean bag. It’s terrific for close-ups of perched birds, and nearly useless for birds in flight. I also have a light-weight 80mm to 400mm zoom that is ideal for tracking flying birds. However, I can’t put them both on the camera at the same time.

So… which lens should I use? It was a gamble. Would the bird stay put, or take flight? Which photos did I want? I found myself constantly switching back and forth, wishing for another camera body (not in the budget!). 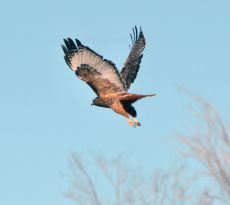 The day wore on. A particularly beautiful, auburn Red-tail caught our attention. A couple of Great Horned Owls were visible as silhouettes, as they stood camouflaged in the densest part of the tree’s branches. I got my first-ever shots of a Merlin, both perched and in flight. The pictures aren’t that impressive—good enough for an ID but not publication—but Merlins don’t happen along every day!

Northern Harriers worked the fields, flying low and slow as they hunted for field mice. I found it impossible to auto-focus on the bird—my lens kept adjusting for the background instead. We were excited to spot a couple of Rough-legged Hawks; they’ve been scarce this year. I happened to have a different lens ready each time, so I caught one perched and the other in flight. 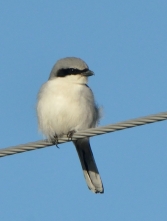 Raptors weren’t the only birds around. Loggerhead Shrikes eyed us as they balanced on the telephone wires. (We consider them mini-raptors, as they’re small but efficient predators.)

Flock after flock of Horned Larks flew overhead, spooked by our approach. (We searched for longspurs among them but came up empty-handed.) Starlings and magpies decorated most of the trees. We even flushed a Wilson’s Snipe from a wet roadside ditch!

The best bird of the day, however, was a stunning dark morph Ferruginous Hawk. As it flew overhead, I snapped a series of shots, the sun shining through the lighter feathers. The result was this, my favorite photo of the day:

One thought on “Photographing Raptors”