Ducks a few feet from my lens. Snow Geese, Canada (and Cackling?) Geese, Greater White-fronted Geese, all hanging out together. Beautiful weather. No crowds. And best of all, a new bird for my life list! The day I recently spent at the Sacramento National Wildlife Refuge complex was about as perfect as a bird photographer’s day can be. 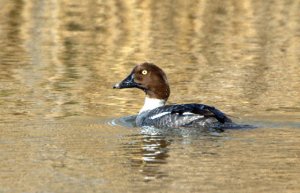 I arrived around 9:30 a.m.—a bit late, but the best I could do given the circumstances (I had been staying with non-birding friends 90 minutes away). This mid-February day was sunny, with blue skies, puffy clouds, and a light breeze—and a predicted high of 81. I cannot express how incredible that warm sun felt on my winter-white, vitamin D starved skin!

Skipping the foot trail, which had opened for the season that very morning, I headed directly for the auto route. My binos were around my neck and my camera, attached to my biggest birding lens, lay on the seat next to me. I was ready to see birds.

The first stop was a viewing deck. I pulled in to the parking spot, grabbed my gear, and hurried over to the railing. Ducks! Hundreds of ducks! They were so close, I had to switch to a smaller lens. Even better, they weren’t the least bit bothered by the arrival of a photographer. Ducks displayed. Ducks courted. They even mated. The pond was a morass of raging duck hormones.

I eventually tired of photographing even the most perfectly situated ducks and looked around, finally noticing the other birds. A trio of bright white Snow Geese caught my eye, along with significant numbers of overwintering Greater White-fronted Geese. The bushes had plenty of other species, including Yellow-rumped Warblers, a variety of sparrows, California’s ubiquitous Brewer’s Blackbirds, and even an American Pipit.

Back in the car, I slowly cruised the rest of the auto loop. As I had anticipated, most of the birds were ducks and geese, coots, and other species you’d expect in a wetland in the middle of California. Anna’s Hummingbirds perched at the very tops of the taller shrubs. Marsh Wrens called from every clump of cattails. I was thrilled to finally manage some decent photos of a Northern Harrier. (My lens always tries to focus on the background, not the moving hawk.) Colusa is one of the nicest refuges I’ve been to and definitely one of the best for photographers.

I ate my lunch in the car, then hurried down the highway to my next stop, Sacramento NWR, a few miles north along I-5.

Sacramento NWR
This refuge is larger and, being right off the interstate, more heavily visited. Because it was President’s Day, the visitor center was closed (and the $3 entry fee suspended). Hearing chirping, I walked over to the building’s courtyard where some mostly empty feeders were attracting finches and sparrows. Just in case, I checked each bird and was rewarded when one of the female “House Finches” turned out to have a white eyebrow—a Purple Finch and new life bird for me! Of course, I had left my camera in the car (thus perpetuating the principle that the best bird of the day appears when one is without a way of recording it).

This refuge also has an auto loop, but the dikes along the road are high enough that it’s sometimes hard to see the birds behind them. After this wetter-than-average winter, in some places the water level was even higher than the dirt road I was on! The water must have been deeper, too, and I added some diving ducks and a few grebes to my trip list.

By this time it was well after noon, and I found myself squinting into the sun—not the best lighting for seeing birds or taking pictures of them. In the future I’ll plan a longer visit, using the mornings for birding and the afternoons for naps.

For the most part, the birds at Sacramento are the same species as those at Colusa. While both sites are terrific birding hotspots, I liked Colusa better. It might have been the morning light, or the nice people I met, or maybe I was getting a bit jaded by mid-afternoon. However, I think that Colusa’s birds are easier to see and photograph. I’ll be sure to return on my next trip to California.