To refresh your memory, here are the photos from March’s Bird Quiz. The bird was seen in California during the month of February. Don’t read any further if you want one last chance to identify this bird.

It’s nice when you see the bird posed as it is in the field guide. But sometimes, you’re out of luck. What happens when you need to Identify a bird from a partial views, an awkward angle, or in bad light? Don’t be intimidated by the parts missing in this photo. There are actually a lot of clues that we can see.

Look carefully. What do we know about his bird?

That’s quite a bit of information.

So, what kind of waterfowl typically adopt a head-down posture like this? Ducks! And, to be more specific, dabbling ducks. Ducks are divided into dabblers and divers. Divers do a cute little leap and plummet head-first into the water, disappearing from view for a bit. Dabblers float around with their fronts underwater, nibbling on the aquatic plants just below the surface.

Next, many dabblers have bright orange legs, but not our duck. This one has gray legs. Note that not all field guides show the legs of every duck. This is why it helps to own more than one guide. If stuck, you can also try a Google image search.

Finally, the tail is short, so it’s not a pintail.

We’ve now narrowed the choices considerably. A quick flip through the field guide gives us our options: American Wigeon, Eurasian Wigeon (several are seen every year on the west coast—we even had one in Colorado a few years back!), and Green-winged Teal. It could also be a Garganey, a very rare visitor to the west coast from Siberia. All the rest are either divers, have yellow or orange legs, or have long tails.

Now things get tricky. I’m not aware of any field guide that shows bottoms-up ducks, just as they don’t show perching birds from underneath. Yet that is how we often see them. This is where the internet comes in handy.

First, let’s look at the Garganey. It lacks the white at the tail. It was a long shot anyway. Next?

How about a Green-winged Teal? According to my field guide (I’m using Sibley’s), the bright part of this species’ tail is more yellow than white. Since I took my photo in bright sunshine, I might have overexposed this buffy hue, making it look white. But Green-winged Teals don’t have tan undersides. I checked online and discovered a white outline to the black tail, not a white spot. (Here’s a link to a helpful photo, the 4th one from the top.) Next?

We’re left with wigeons. Both have black tails and dark gray legs. If you look closely at the tail in the side-on illustration, you can see a thin white line. That matches the small spot of white we see in the photo.

At this point, we can’t tell which wigeon we have. American is much more likely, but the field marks distinguishing them are on the end of the duck that’s underwater. Since I took the photo, I can confirm that it’s an American Wigeon. Here’s what the rest of the duck looks like: 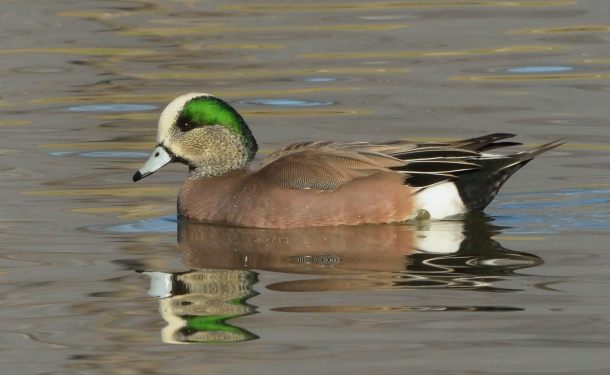