To refresh your memory, here is the photo from May’s Bird Quiz. The bird was seen in California during the month of April. Don’t read any further if you want one last chance to identify this bird.

I had fun watching these birds wheel and dive over the bay last year. We were in Silicon Valley. My husband was off in a series of meetings, and I was free to wander through Mountain View’s Shoreline Park, photographing and enjoying the birds and other wildlife.

Most people recognize a “seagull” (even though we birders know that they’re simply “gulls”—many of them are found far inland, including here in Colorado. This one looks a bit pointy, sending us to the back of the section on gulls where the terns are listed. If you’re not sure why this is a tern, check out that long, sharp bill, pointed wings, and impressive swallowtail. The black cap clinches the ID.

I’ve discussed terns before. It seems that God placed a series of parts in front of himself and then started assembling them in all the various combinations possible. With a few obvious exceptions (Black and Sooty Terns), the birds are basically white. Feet are orange or black. Bills are orange, black, and/or yellow. Their heads have varying amounts of black in different patterns depending on species and time of year. And finally, a few have some other subtle adornment, such as the fluffy feathers on the back of the Elegant and Sandwich Terns’ heads. Oh, and they come in different sizes—something difficult to compare when the birds are in the air.

Sometimes these field marks change with the seasons. Bills that are black in winter may be orange or yellow during the breeding season (pretty colors being ever-so-much more sexy). If you can get a close enough look, some beaks are bi-colored. For example, the Sandwich tern has a black beak with a yellow tip. Colors also change with age. A juvenile Royal Tern has yellow feet, which turn to black as an adult.

Our bird has orange feet, so let’s start there. I took the photo in April, right on the cusp of breeding vs. non-breeding plumage. Since the bird’s black cap indicates readiness to mate, we’ll assume the bird is an adult and in its breeding plumage.

A quick run through the field guide turns up four candidates: Roseate, Forster’s, Common, and Arctic Terns. Of these, only two are likely to be seen in the San Francisco Bay area, but you never know when a rarity will turn up.

Roseate Terns are found in New England, the Bahamas, and Dry Tortugas, not the west coast. The bird does look like one, but it’s extremely unlikely. Our bird also lacks the pink tinge that give Roseate Terns their name. Let’s keep looking.

Forster’s Terns are common in Shoreline Park. But they have an orange beak. Our bird’s beak looks black. Hmmm…

Common Terns have a thicker beak that’s bright orange with a black tip. Our bird’s beak is too thin. Common Terns breed on the east coast and throughout central and eastern Canada. We’ll rule that one out.

Arctic Terns are famous for their pole-to-pole migration, so they could be on their way north in April. However, Arctic Terns migrate offshore, so I’d be unlikely to see one in the bay. Plus, their bills are very short, and our bird’s is long. Nope, not an Arctic Tern.

Well. We seem to have eliminated all the possibilities! But let’s go back to the most likely species, the Forster’s Tern. When I first tried to ID this bird (from the photos when I got home), I was really confused. How could it be a Forster’s Tern with that black beak? Then I realized that the black could be due to a shadow.

This wasn’t the only picture I captured of this individual. Here are a few more, including an enlargement showing the head: 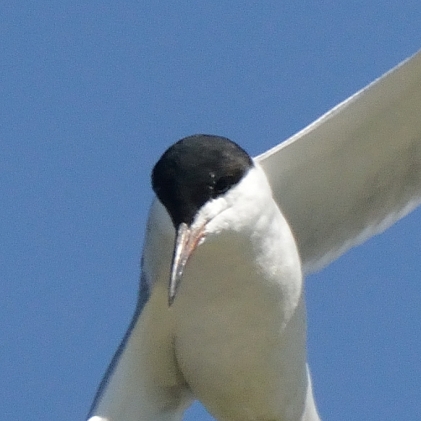 That beak doesn’t look totally black any more, does it? It’s not the bright orange it will probably bee in another month, but it appears to be heading in that direction.

We can easily be misled when identifying a bird from a photo. Vagaries of light, wind, the position of the bird, and individual variation can all lead us in the wrong direction. This is also why I prefer field guides with drawn illustrations, rather than photographs.

So yes, this is a Forster’s Tern. Did you get it right?

One thought on “May Quiz: Answer”