One of my favorite Colorado animals is the pronghorn. Even after two decades of living here, I still excitedly point them out whenever we see them—and we see them a lot. They even grazed in the field across the street from our old house. I think part of their appeal is that I know that pronghorns are unique to this part of the world.

Their range extends from the deserts of southern California, the southwest, and northern Mexico; north to southern Canada; and east through the prairie states to Texas and Minnesota. I’m so glad they’re here in Colorado!

Pronghorn are unique in other ways, too. They are the only member of their taxonomic family (Antilocapridae), which is different from that of the true antelopes of the eastern hemisphere. While they may look like they have antlers, those are horns made of compressed keratin, not bone. However, those horns branch like antlers. And, like antlers, they’re shed every year. No other animal has anything like that! Like other animals with horns, such as cows and sheep, the horns adorn both sexes, but those on the females are much smaller. 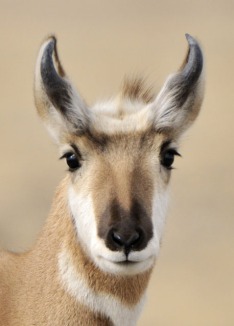 It’s easy to tell that pronghorn are prey animals. Their eyes, on the sides of their head, give them a wide range of view. They’re fast, too, reaching 55 mph in a short sprint, and maintaining a steady pace of 35 mph for miles. That’s almost as fast as a cheetah, and with better endurance! Current predators include mainly bobcats, mountain lions, wolves, and coyotes, which they can easily outrun, but there’s a strong likelihood that they were once hunted by the faster, but now-extinct, American Cheetah.

When they’re not running from hungry predators, pronghorn spend their days munching grasses, sagebrush, and other small forbs. They’re not picky eaters, and will chow down on plants that grazing cattle eschew. But like cattle, they tend to hang around chewing their cud.

When their food gets covered with snow, pronghorn migrate to lower elevations. One major route takes them 150 miles each way between Wyoming’s Grand Teton National Park and the Green River Basin. That’s a longer route than any other North American mammal except caribou (and college students on spring break).

This migration has its hazards. Besides cars and predators, there are fences. Pronghorn can’t jump over barbed wire fences; they must go under them. If you’ve ever tried to emulate this maneuver, you know the difficulties! Happily, there is a push to replace the bottom strand of barbed wire fences with un-barbed wire, so the animals can squeeze through without hurting themselves.

When the summer starts to wane, the strongest males collect small harems that they defend against all comers. That’s when those pronged horns come in handy. They mate in late summer and early fall, and the females are pregnant all winter. The young are born in late spring, either singly, or, more often, as twins. Next comes the most dangerous time of their lives, as less than half make it through the next two months. Those young that survive hang out with mom for the next year, until they’re big and strong enough to fend for themselves. Pronghorn typically live to a ripe old age of around ten years.

Pronghorn as a whole (Antilocapra americana anteflexa) are in no danger of extinction, with about 20,000 animals in the current herd. (This is down from millions in the mid-1800s). Hunting is permitted in many states.

Several subspecies, however, are seriously endangered. For example, less than 150 individuals remain of Baja California’s A. a. peninsularis. The Sonora pronghorn (A. a. sonoriensis) is protected by the Endangered Species Act, with a total of about 275 animals, half in Mexico and half in Arizona. There are also a Mexican subspecies, A. a. Mexicana, and an Oregon one, A. a. oregona.

It’s good to know all these interesting facts about one of my favorite animals, but what makes me smile most is the flash of white as they turn tail and run, alerting the entire herd to the presence of the dreaded, dangerous, and dire wildlife photographer.

One thought on “Where the Pronghorn Play”