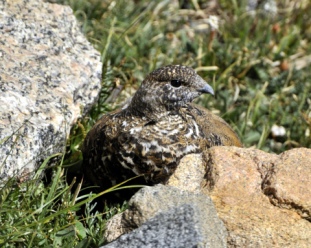 Last week I mentioned that we’d spent four days at Rocky Mountain National Park. One of the species all birders hope to see there is the White-tailed Ptarmigan. But unlike the Clark’s Nutcrackers, which happily pose at Rainbow Curve, ptarmigan are darned hard to find.

It’s not that they aren’t around. I’m sure there are plenty of ptarmigan on the alpine tundra or hiding in the willow carrs. The problem is that you can never see them—even when looking straight at them!

Debbie and I were alerted by a returning hiker that a pair of ptarmigan were wandering around the rocks at the end of the Tundra Trail, so we knew to look. Debbie even heard a soft clucking sound—much like a mother hen makes. And being the expert she is, she quickly found the pair of birds. I’m not that much of an expert.

“They’re right there, about 30 yards out, right by that rock.”

There are thousands of rocks.

Which of the many green patches are you referring to?

Needless to say, this went on for quite some time—probably 15 minutes, or more. Finally I figured out which rock she was referring to (it really was obviously a reddish triangular). Now to find the birds. Add another five minutes.

Wait! There is a bird out there!

I had found the female. Now to spot the male. Just a sec—where did she go again?

Eventually I was able to keep both birds in view at the same time. Now I had to find them through my camera. I didn’t have my longest lens with me—it’s too heavy to haul very far, especially at an elevation of over 12,000 feet. But I used what I had—a 400 mm telephoto—and pointed it in the right direction. I couldn’t see the birds, but I figured that if I aimed in approximately the right spot, the ptarmigan would be included. And they were.

You think I’m really bad at spotting birds? You try! The picture of the female ptarmigan at the top of this post was taken several years ago on Mt. Evans, to give you an example of what you’re looking for.

I’ve taken care of the easy part. You don’t have to scan an entire field of rocks. And my camera settings limited how much of the picture is in focus, so that should help too. The female is in the top picture, the male is in the bottom one. (It’s the same scene, but the birds were moving.) Can you find them? 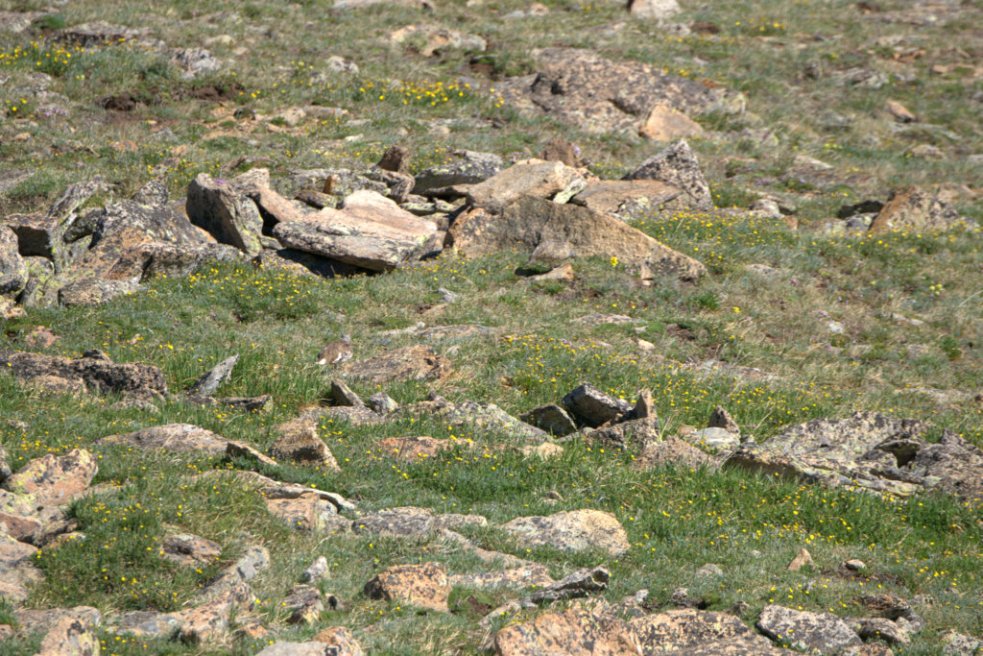 I’ll post the photos again next Monday, with the birds circled.