What am I talking about? Muskrats!

Once valued for their fur, muskrats are disliked for some valid reasons. They’re considered pests because they burrow into the banks of streams and ponds, causing erosion and leaks. They also carry diseases that can hurt us, such as tularemia, leptospirosis, giardiasis, or even rabies. Add in their rat-like appearance, with a hairless tail and typical rodent face, and it’s no surprise that muskrats don’t have many fans.

I, however, like them. I always get a big smile when I see one. Why? I generally like small, furry creatures. We don’t have a pond or stream to maintain. I don’t get close enough to pick up any nasty diseases. And muskrats play an important role in the wetlands where they live. 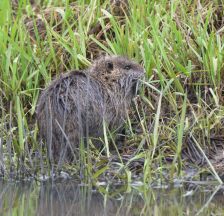 Like many rodents, muskrats breed prolifically, and they’re quite common as a result. Mated pairs are monogamous and produce several litters per year with up to fourteen babies per litter, although four to eight is more normal. The naked and blind infants hang out with mom for a while (while dad takes a vacation), although they’re weaned after the first month. A new litter may be born in a different chamber in the den before the previous one has left home. At some point, the species’ aggressive territoriality kicks in. Much depends on the current food supply—good neighbors will turn nasty when food becomes less available, and youngsters attempting to move back in after leaving home may be attacked and killed.

It’s easy to tell if there’s one or more muskrats in an area. Their distinctive tracks—five fingers on the hind feet, four on the front*, with a dragging tail down the middle—will be left on the mud. Collapsing banks are hard to miss. Even harder to miss is the shelter they build. It looks like a cross between a beaver lodge and a packrat nest, reaching up to eight feet across and five feet in height—large enough to hold the whole family.

With all this negative press, is there anything beneficial about muskrats? Like their rodent cousins, muskrats are dinner for an assortment of predators, especially mink. The warm homes they leave behind are reused by many other species, including snakes, turtles, frogs, and raccoons. And their dining habits help to maintain the water quality of their ponds.

While muskrats are omnivorous (eating fish, snails, mussels, crustaceans, and insects), they prefer their veggies, chowing down on cattails, sedges, and other water plants. The harvesting of this vegetation creates open areas where less competitive plant species can grow, and allows water to keep moving through the pond. And according to one article, “When muskrats clear out areas of emergent vegetation, they provide nesting sites for water fowl and wetland birds such as Canadian [sic] Geese, Mallards, cranes, heron[s], and many other species.”

I knew there is a reason I like muskrats. They benefit the birds!
_____
*There are actually five fingers, but the smallest one doesn’t show up in the tracks.