In last month’s post on “Who Ate My Plants?” I described the following scenario:

The heavy snowfall took a while to melt, but finally your dormant lawn emerges from under its frozen blanket. Last time you saw it, it was perfect turf, smooth and even. But now, it looks as if an army had performed maneuvers across your yard! Shallow furrows run here and there around islands of still-intact grass. What in the world?! 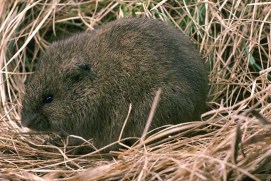 This kind of damage is classic vole damage. That’s vole with a “v.” Many people have never heard of voles. They’re rodents, close cousins to mice—a bit fatter perhaps, with a rounder head and smaller ears and eyes. Unlike a mouse’s, their tails are covered with hair. For our purposes, just consider them annoying meadow mice. Prolific mice—a single vole can give birth to a hundred more voles in one year.

The problem is that voles eat things we are trying to grow. Everything from vegetable crops to ornamentals, trees, and turf grass are on the menu. The only good news is that voles are poor climbers, so damage is usually limited to a few inches above ground to a few inches below ground. (If there’s a way they can gain access to higher branches and bark, such as in the case of deep snow, those will be at risk as well.)

Lawns are often severely marred by vole tunnels. In winter with persisting snow cover, the voles are protected from predators as they tunnel along between the frozen ground below and the snow above. The result is an unsightly maze of channels cut through the grass that don’t appear until the snow melts. Groundcover junipers are particular susceptible to vole damage. The rodents run along the surface of the ground and gnaw the bark off branches they encounter, girding and killing them. Trees, especially newly planted fruit trees, are also subject to girding. This is one reason it’s wise to keep mulches pulled back from the trunk. When wrapping new trees to prevent sunscald, make sure there’s no room inside the wrapping for voles to hide, especially at the base. If a tree seems to be ailing, try removing a few inches of soil at the base to see if little teeth have been gnawing on the bark.

Voles have tiny teeth, and you can confirm their damage by the size of the gnaw marks—about 1/8 inch wide and 3/8 inch long. Rabbit teeth are larger and nearly always make cuts at a 45° angle.

How do we keep voles out of our yards? UC Davis recommends a wide buffer zone cleared of all vegetation—an exposed area that voles would fear to cross, but this isn’t practical in a neighborhood. (I can just see the HOA having fits!) A wire mesh fence with ¼-inch or smaller openings, extending at least a foot high and buried six to ten inches deep, will keep them out of a garden area. Or simply encircle the base of young trees or shrubs with the hardware cloth (or plastic or metal cylinders, such as soda bottles or tin cans). Make sure that barrier is buried as well. Check it often to make sure it’s not sheltering the very animal you’re trying to exclude!

Instead of protecting your plants, you can try eliminating the voles. Traps and poisons are both options. Mousetraps set along the runways will be triggered by passing animals even without bait. Place the traps sideways, with the trigger where the vole will run over it. You’ll need a lot of traps—at least a dozen for a small garden. Don’t directly handle the animal once it’s caught, as they can carry diseases—bag it and toss it in the trash.

Poison baits can be effective in areas with a lot of voles. D-con is one option. Just be sure to check for and quickly dispose of dead animals. Pets or wildlife that eat the poisoned voles could be killed as well. Again, place the bait in the runways, as the animals rarely stray from their familiar paths. Make sure it’s inaccessible to children or pets. 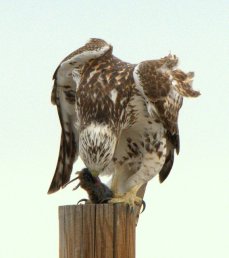 Lest you feel guilty about killing your voles, keep in mind that their average lifespan is only three to six months. Approximately 88% of voles die before they’re a month old, even without our help. This is because many animals prey on voles—coyotes and foxes, weasels, cats, snakes, and especially hawks and owls. A single Barn Owl can consume six voles every night. Unfortunately, that’s not enough to lower the population to the point that no plants will be damaged.

A few things don’t work. Repellents are available, but are not recommended. It’s hard to guess where the voles will dine next, and repellents have to be in place ahead of time to prevent any damage. Also, it’s difficult to spray at the soil line or below it. There are also electronic devices on the market that claim to keep voles and other animals away from your yard, either though sounds or vibrations. These won’t work on voles (and likely not on anything else, either).

Voles can definitely damage a lovely landscape. While I cringe at any damage to the plants I’ve paid for and tended, it helps to keep in mind that voles play an important role in the ecosystem. They eat a lot of undesirable weeds. And they help support a lot of wildlife—by serving as dinner.
_____
Meadow Vole photo: http://www.fcps.edu/islandcreekes/ecology/meadow_vole.htm
For more information, read CSU’s fact sheet, “Managing Voles in Colorado.”