At this time of year, most plants are bent on making seeds, not blossoms. Not so the dahlias. Among the blowsy seedheads and fading foliage, their vibrant colors declare that the season isn’t over yet.

My parents retired to Mendocino, on the coast north of San Francisco. There, the cool but mild climate is similar to that of England, and dahlias (indeed, most perennials) thrive. Those my dad grew were as big as dinner plates! I admit to jealousy. Here in Colorado, it’s not so simple; you have to want to grow dahlias. Spectacular flowers in flamboyant hues are your reward.

There are many different types of dahlias, and it’s important to choose the ones best suited for your site. Flowers range in size from less than four inches to over ten inches! Shapes are just as varied. Some are daisy-like single blossoms surrounding a yellow center, while others form pompoms so packed with petals they look like fluffy balls. Another group is a combination of these two, with a row of single petals around the outside and a poof of petals clustered in the center. I particularly appreciate the dahlias that resemble water lilies.

Then there are the colors—simply amazing. You can choose from every shade of red, from dark wine to delicate pink, plus purples, yellows, oranges, and white. Or maybe get some of each!

Plants range in size from dwarf cultivars ideal for the front row to garden giants five feet tall or more. Large, toothed leaves climb a thick, succulent branching stalk. The foliage is usually green, but can be dark, almost black, making for a striking contrast with the bright blossoms. 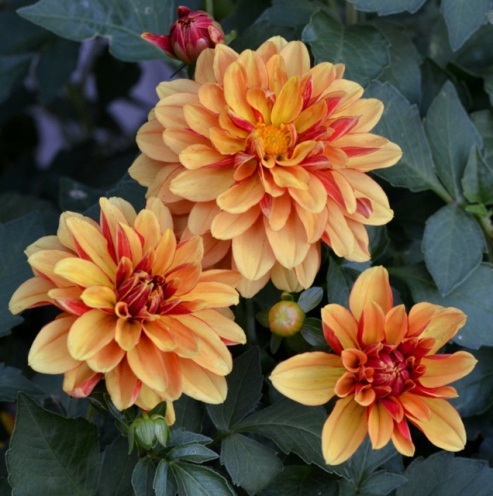 Dahlias grow from a thin-skinned tuber that turns to mush in freezing temperatures, so we who live with cold winters have to dig them up every fall, store them over the winter, and replant them in the spring. If the flowers weren’t so gorgeous, I’m not sure we’d bother.

Dig about two weeks after a killing frost, but before the ground freezes—usually late October here along the Front Range. Cut off the brown foliage, leaving a short stem. Gently pry the tubers from the soil, wash them, and let them dry for a day or so in a spot above freezing. Then store them in a newspaper-lined box surrounded by damp peat moss or wood shavings. Place the box in a cool (40-50° F.) spot, such as an unheated garage. Check monthly to make sure they haven’t dried up or started to rot.

Since Colorado’s spring weather is notoriously unpredictable, it’s best to wait until the soil is 60° F. before replanting your dahlias. Or you can start them six weeks ahead of time in a tray full of damp potting soil and transplant them outside when the soil reaches 60° F. (Soil temperature is usually measured about six inches deep, at about eight o’clock in the morning.)

Pick a spot in full sun. Soil should be well-drained. Too much nitrogen will result in weak, leggy plants, so don’t add fertilizer unless a soil test recommends it. Many growers recommend feeding with potassium and phosphorous, but Colorado soils have plenty of these nutrient minerals and too much is toxic.

Spring planting is a good time to divide overgrown plants. Use a clean, sharp knife to cut through the clump of tubers and roots, making sure each part has a tuber with at least one growth bud, or “eye.”

Place tubers on their sides about six inches deep and 18 to 24 inches apart, and cover with soil. Add a stake or peony cage if the plants will reach three feet or higher. A layer of mulch—wood chips or shredded bark—will keep down weeds and mitigate extremes of soil moisture and temperature.

Water sparingly until growth really starts, then make sure the soil stays damp. Dahlias are not xeric plants. Pinching off the growing tips at this point, and later removing the first flower buds that form, will make for stronger, bushier plants with more flowers. Keep up with the weeding, too.

Unfortunately, dahlias have enemies. Spider mites are a significant pest. Many sites recommend a regular spray program with a miticide such as Kelthane. Some cultivars are more resistant than others, so keep that in mind when buying tubers.

Thankfully, snails and slugs are not a big problem here at 7,100 feet, but they could show up in a well-watered garden. Earwigs and cucumber beetles (they resemble green ladybugs) can also do some damage, but rare enough to truly harm the plants. There’s some dispute about whether dahlias are deer or rabbit resistant—they appear both on lists of resistant plants and on lists of plants the critters find delicious. It probably depends on the preferences of your local wildlife.

Powdery mildew tends to show up late in the season. Good air circulation helps prevent this fungus, but it’s not usually worth trying to cure as the leaves will soon freeze anyway. If you’re concerned, you can try to stave it off by spraying regularly with a fungicide, starting in mid-summer. 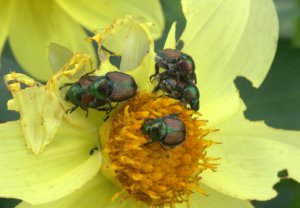 The dahlias in Denver have taken a big hit from the recent arrival of voracious Japanese Beetles (right). Because they’re highly mobile, they’re difficult to control. Some gardeners try spraying. Others take a vacuum hose to their plants. I know some who pay their small children a penny for each beetle collected.

Whether you plant them in a perennial border or a large pot on the patio, whether you admire them in the garden or in a vase on the table, dahlias are worth the hassle. Now is the best time to order seed or tubers to be delivered in the spring.