To refresh your memory, here is the photo from December’s Bird Quiz. The bird was seen in Washington during the month of March. Don’t read any further if you want one last chance to identify this bird.

I think everyone will recognize this as a gull. (Technically, it’s not a “seagull” since gulls are found all over, not just near water. Our landlocked state has plenty of them, especially at landfills.) Like many other bird families—owls, hummingbirds, woodpeckers, raptors, etc.—gulls fall into the category of “birds that are easy to ID, until you want to know which exact species it is.” At least we know what part of the field guide to look in.

When it comes to identifying gulls, part of the problem is that they keep changing their plumage as they age. Until a gull is an adult, which takes two to four years, they’re very tricky. Another problem is a strong tendency of gulls to hybridize. As Sibley states in his excellent Guide to the Sibley Birds, “Identification of hybrid gulls is difficult and often conjectural.”

Toss in a great deal of individual variation, particularly among immature birds and just before molting (due to wear and tear), and you can see why some people just declare, “I don’t do gulls.” (I also know birders who refuse to learn sparrows; they say the challenge takes away their enjoyment. I see their point.)

This bird, however, is identifiable, and you don’t need to be an expert. To start with, I was nice (tell Santa)—I posted a photo of an adult. Everything from here on will apply to adult birds, not immature ones. I won’t throw an immature gull at you until I’m much better at identifying them myself!

I like to start my ID by determining if it’s a black-headed gull, a big, “normal-looking” gull, or one of the “weird ones.” I know, very scientific of me. But if you look in a field guide, you’ll see what I’m getting at.

Some species have black heads while breeding, and usually some sort of dark “fringe” the rest of the year. Examples would include Franklin’s (right), Bonaparte’s, and Laughing Gulls, although they are many others. Our gull has a white head, so we can eliminate all these.

Some gulls have other markings. Ross’s Gull is unique in having a lovely black necklace, that in winter becomes a black spot behind the eye. Ivory Gulls are pure white while Heermann’s Gulls (left) are very dark. We can easily eliminate these “oddball” species.

Now for the “normal” gulls. I guess I think that they’re normal because I grew up at the beach in Southern California, and our predominate species were Western (below) and California Gulls. So when I think of a gull, I think of a reasonably large white bird with mostly darker wings with black tips. (Another familiar example is the Herring Gull.) At first glance, these birds, in the genus Larus, all look the same, but there are clues. 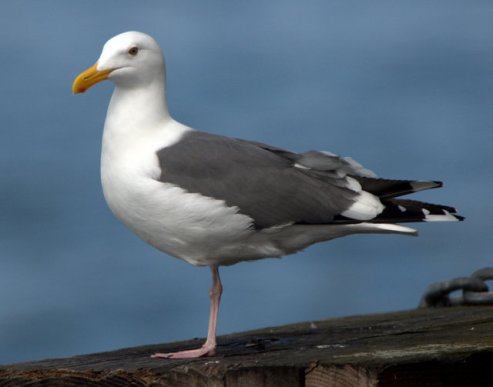 I tend to avoid using size, as I’m horrible at estimating measurements, especially with a single bird. However, gulls tend to come in flocks, which makes comparisons more accurate. Western Gulls are noticeably larger than California Gulls, for example. However, I just gave you a photo of a single bird. We can’t use size.

When faced with a strange gull, it’s more helpful to look at the overall bird—is it light or dark or somewhere in between? Then check three things—the eye color, the leg color, and the beak.

We check the beak because Ringed-billed Gulls (right) are ubiquitous, and a quick ID can be made just by looking for that ring. Also, some species’ bills have red dots on them (pecked at by nestlings to demand food).

Our bird is your basic gull— white head, no ring or red on the yellow bill, and medium gray on the back and wings (much darker than Washington’s abundant Glaucous-winged Gulls). That eliminates more possibilities. Happily, the bird wasn’t in the water, so we can see its legs—they’re yellow. And I was close enough to see the eye color—it’s dark with a red “orbital ring” around it.

Now I turn to the section on gulls in the genus Larus, and look for dark eyes, yellow legs, and unmarked bills. (This is where a comparison page comes in very handy—I can see all the candidates at once.) It turns out there is only one gull with a yellow, unmarked bill. A Mew Gull also has a “dusky” iris, red eyeliner, has yellow legs, and is medium gray.

That wasn’t so hard, was it?