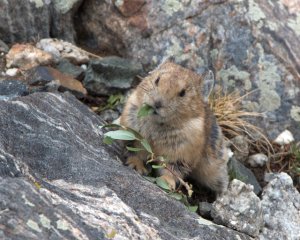 Living at 7,100 feet at the base of the Rocky Mountains, I sometimes complain about our cold winters, especially as they stretch into March and April. But imagine spending the winter on top of the Rockies, at 11,000 feet or higher. At these elevations, winter lasts from October to May. The wind howls, blizzards come without warning, and the snow that doesn’t blow away piles deeply over the tundra.

Many species that summer on top of the mountains migrate vertically to lower, more sheltered wintering grounds. Of the few that remain all year, most hibernate.  But amazingly, there’s one small mammal—six inches long, weighing a mere six inches—that chooses mountaintop scree slopes as its home: the pika.

While they look like rodents (they remind me of oversized hamsters), pikas are actually in the rabbit family. With their small (for a rabbit), rounded ears and bright black eyes, you wonder how anything this cute can be that tough—but tough they are. 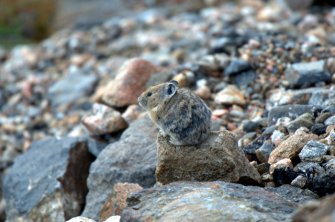 Pikas are particular about their habitat. They’re only found above the treeline in piles of shattered rocks, such as those that make up talus slopes or mine tailings. Adapted for cold, heat kills. Pikas will die in temperatures much over 70 degrees, unless they can find a cool spot (usually underground) in which to escape the heat.

Because their granite-gray fur perfectly matches their surroundings, they are often heard before they’re seen. Their piping calls serve to warn of predators, to get the attention of a female, and simply to let the other pikas know they’re there.

Animals need three things to succeed as a species. They need safety from both weather and predators. They need something to eat. And they need to produce a new generation. When you live under such extreme conditions, you have to really bustle to accomplish all three.

While they are communal animals, each individual pika has its own territory that it will defend against intruders. In the summer you can see pikas sunning on a handy boulder, keeping tabs on their turf and watching for danger. When threatened, they dive under the rocks for protection. Pikas don’t dig burrows, but rather make use of the natural spaces between and under the rocks. These gaps combine to form maze of  underground paths , complete with separate chambers for food storage and nesting. Here, they hide from predators, which include coyotes and foxes, bobcats, weasels, and birds of prey. When winter snows arrive, they retreat into their dens, venturing out on sunny days to forage. 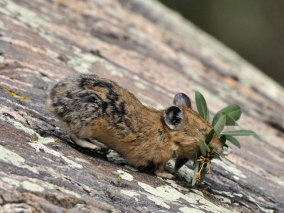 Since they’re active year round, pikas must have a continuous food supply. During the summer, they both browse on nearby vegetation—sedges, grasses, wildflowers, and the like. They also gather piles of plants that they dry for the winter. Appropriately, their harvesting is referred to as “haying” and these piles are called haystacks. 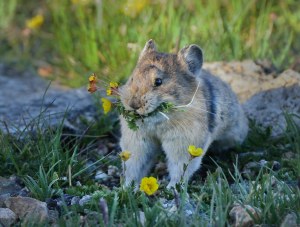 Somehow, the animals know when to harvest each type of plant to maximize its nutritional value. I’ve watched pikas make repeated runs between the plants they are harvesting and their haystacks—over 100 trips per day! They need to work this hard; in order to have enough to eat all winter, each pika needs to gather the equivalent of a full-sized bale of hay. When cold weather arrives, the animals move their haystacks into the shelter of their dens, allowing for easy access in deep snow .

Pikas also eat their droppings. That sounds disgusting, but there is still food energy in the digested plant matter, and food is scarce on top of a mountain. Some are eaten as soon as they are produced, while others are saved as for winter.

Springtime is the time for romance, and pikas, being rabbits, excel at breeding. They don’t even wait for the snow to melt; in the Colorado Rockies, mating season starts in May and June. It tends to be love at first sight as next-door neighbors pair up to mate, although females with more than one male nearby might be a bit choosier. To attract her interest, the male will sing—I picture him with a little guitar, crooning below her balcony!

Like other rabbits, the females ovulate after copulation, ensuring fertility when it counts. Thirty days later two to six babies are born blind and nearly hairless. By this point, the males have moved on, and she is left to raise her litter by herself. The young pikas grow quickly, leaving to establish their own dens when just a month old and reaching maturity two months after that. Once the kids are out of the nest, the female may mate again. This second litter is just insurance; since nursing depletes essential fat reserves, mom will only feed them if the first litter doesn’t survive.

With their very specific habitat needs and isolated populations on separate peaks, pikas are far from secure. According to Wikipedia, “A 2003 study, published in the Journal of Mammalogy, showed nine of 25 sampled populations of American pika had disappeared in the Great Basin, leading biologists to conduct further investigations to determine if the species as a whole is vulnerable.” In spite of these warning signs, they’re still listed as a “species of least concern” on the UICN Red List.

Happily, pikas are more cuddly than a sand skink*, more endearing than a gray bat*, and definitely more approachable than a polar bear. If future scientists determine that pikas do warrant protection, their incredible cuteness will certainly help.
_____
* Listed by the EPA as endangered.

One thought on “Precious Pikas”