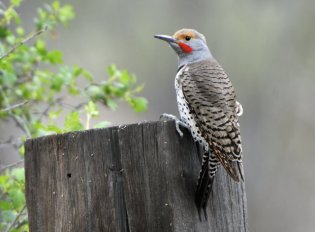 Last year, our son-in-law, Ian, fell when the ladder he was using collapsed out from under him. Given that his head had been more or less at the same level as the eaves of their single story house, it had accelerated to approximately 13 feet per second when it hit the cement patio. Unsurprisingly, the impact knocked him out. Thankfully, all he suffered was a severe concussion. It could have been much worse.

From our backyard, I have been watching a Northern Flicker make a hole in the mostly-dead oak tree next door. According to one website, the woodpecker’s beak is hitting that trunk at a significantly higher speed than Ian’s head was going when it hit the pavement—closer to 19 feet per second.

Or, let’s look at the impact as a percentage of the force of gravity. If I did my math correctly, Ian’s head hit at about 0.4 g’s, while the woodpecker is slamming the tree at over 1,000 g’s—more than 2,400 times as hard!

Yet, Mr. Flicker is perfectly fine. How do woodpeckers manage to survive this impact, one they may repeat up to 20 times a second, or 12,000 times a day?

Our family made some teasing comments about Ian’s thick skull, but human skulls are thin and fragile when compared to the skulls of woodpeckers. When viewed under an electron microscope, woodpecker skull bones appear spongy, allowing the skull to compress with each strike and cushioning the brain.

The bone is also riddled with numerous reinforcing projections called trabeculae. These are concentrated in the front and back of the skull, where the force of impact is strongest. This placement coincides with the birds’ ability to hit their target straight-on, directing the force to the reinforced parts of the skull. (Trabeculae are present in the skulls of other bird species, but woodpeckers have many more of them, making their skulls much sturdier.) In addition, the birds’ precise pecking keeps rotational injuries to a minimum.

There’s more. Woodpeckers’ neck muscles are thick and tough. They contract as the beak hits the tree, absorbing the force of each impact and spreading it out over a larger area. This is so effective that, according to an Audubon article, 99.7% of the energy that comes from each impact is passed on to the woodpecker’s body, with only 0.3% affecting its head.

However, even that small amount can be problematic, so the woodpecker’s head converts the force of impact into heat. As the bird pecks, the temperature inside its skull rises, eventually signaling that it’s time for a rest break.

All birds have a second, inner eyelid. It protects the fragile cornea from wind and dust; you can see it in this photo. But woodpeckers also have a third inner eyelid. This thick membrane guards the eye from flying debris, protects the retina from tearing, and holds the eyeballs in place—preventing them from literally popping out of the birds’ heads! In addition, the outer eye is turgid with blood, which also helps to hold the retina in place.

Concussions happen when our brains are knocked around in the cerebral spinal fluid that bathes them inside our skulls, bruising them against the bone. But woodpeckers lack this fluid. Their brains are small and smooth, fitting tightly in place and greatly reducing the danger of a concussion.

Concussions are also prevented by the shape and position of the birds’ hyoid bones. As a 2014 article explains, they’re much bigger than in other animals, wrapping “all the way around the skull and, in some species, even around the eye socket or into the nasal cavity, eventually meeting to form a sort of sling shape.“

Even the shape of the beak plays a part. The upper beak is longer than the lower beak, but the lower beak is stronger. It’s believed that this also helps diffuse the force of each impact, directing energy to the lower beak and the bottom of the skull.

While we may not enjoy being wakened at dawn by a sex-crazed flicker hammering away on our roof flashing, we can’t help but be impressed at how well adapted woodpeckers are for their unique place in nature. At least now we have some fascinating facts to contemplate while listening to their racket.
_____
Woodpeckers, from top: Northern Flicker, Nuttall’s Woodpecker, Gila Woodpecker, Red-bellied Woodpecker.

One thought on “Head Bangers”