We hear that it’s better to choose native plants over exotics for a variety of reasons. They’re perfectly adapted to the soils and climate. They host native insects that provide food for birds and other wildlife. They fit into the landscape, providing a “sense of place” that exotics can never match. But what is a native plant? 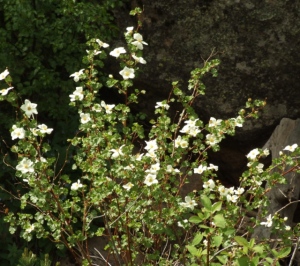 When we picked plants for our new house, I included many plants touted as natives—Boulder raspberry (Rubus deliciosus, left), bearberry (aka kinnikinnick, Arctostaphylos uva-ursi), Oregon grape holly (Mahonia, below), manzanitas, buffaloberry (Shepherdia), penstemons, and more.  I also selected plants from other places, plants I happen to appreciate for one reason or another. Many of my favorite perennials come from overseas—catmint (Nepeta), Jupiter’s Beard (Centranthus ruber), many hardy Geraniums—not to mention most of my vegetables and our apple tree. So while I favor natives, I’m not a die-hard natives-only kind of person.

One of the problems with choosing to grow native plants is defining just exactly what qualifies as a native. Scientists define a native plant as “a plant species that occurs naturally in a particular region, state, ecosystem, and habitat without direct or indirect human actions” (Federal Native Plant Conservation Committee, 1994).

In other words, native plants for my yard would be limited to those that would grow on our property if no developer had ever come in and rearranged the soil, drainage, exposure—compacting the soil, building houses, and paving streets. I’d also have to leave out all the annual grasses that now dominate the shortgrass prairies, as they originated in Europe, the seeds carried here along with the hay for the settler’s horses.

But wait—there used to be a Ponderosa pine forest in this spot. Over a hundred years ago, the trees were cut to provide lumber for the growing city of Colorado Springs, and other vegetation sprang up in their place. With that in mind, even the near-by fields of scrub oak and grasses aren’t natural. So if I was intent on only planting native species, I would have to recreate the forest (which is still present a few miles away).

There’s a problem with that. Even apart from the HOA (who is surprisingly reasonable, but would balk at a lot completely covered with pine trees), our property isn’t in the same condition it was hundreds of years ago. I would do better to choose plants that can handle the reality that I live in a subdivision with vastly different growing conditions.

Perhaps that definition is too restrictive. Let’s have “native” mean plants that naturally grow in our state. But wait—Colorado has mountains that soar to over 14,000 feet, with lower slopes thick with conifers and aspen, and peaks topped with tundra. The southwest is desert. The Front Range is edged with foothills covered with scrub oak, piñon pine, and junipers. The entire eastern half of the state is covered with the aforementioned shortgrass prairie. Which native plants should I grow?

I can choose to define native as a plant that naturally grows in this and other near-by areas. That gives me a bit more flexibility. Purple coneflowers, for example, are native to the prairie states, although they prefer more water than we get here in the rain shadow of the Rockies. If I irrigate (and protect them from rabbits), they do well here. But how far afield can I go?

Recently, one of my horticulture discussion groups had a big argument about Japanese Barberry (Berberis thunbergii). The consensus is that it should never be planted, and I was criticized for suggesting otherwise. I understand that it’s a noxious weed in some states, but here in Colorado it’s a widely used landscape shrub. I’ve never heard about any problems with it escaping cultivation in my area, in spite of its ability to handle our soil and climate challenges (with extra water and amended soil). The only complaint I have is that it seems to appear in every landscape in town. I’d prefer more variety.

One expert insisted that a better choice would be to plant the “native” American barberry (Berberis Canadensis). In this case, apparently “native” means it naturally grows somewhere in the United States. The problem is that American barberry isn’t native to Colorado. It’s an eastern species, growing from Missouri to the Atlantic, and from Alabama to Illinois. That tells me it needs much more water than we get in our dry state. In addition, it’s listed as being hardy to zone 6. I live in the cold end of zone 5. No wonder I’ve never seen it for sale.

This whole exercise goes to show how much trouble we can get into when we become overly legalistic. Maybe we need to relax a bit, choose plant species that are well-adapted to our specific site, and include locals as much as is reasonable. Gardening is supposed to be fun, after all.

One thought on “Going Native”