Purple Coneflower (Echinacea purpurea) used to be purple. You can still buy the purple-flowered version of this perennial (actually more of a pink, at least to my eye), but purple is only the beginning. Consider passionate hues such as raspberry pink and florescent orange. On the other hand, perhaps you’d prefer delicate pinks, or even an innocent snowy white. A related species, E. paradoxa, below, is a pure lemon yellow. 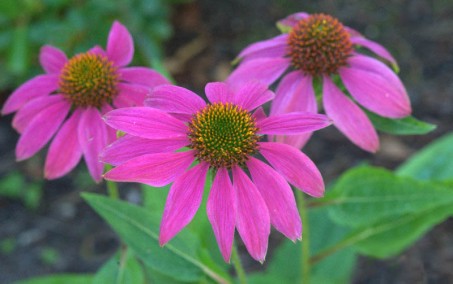 The originalspecies has sturdy petals bent backwards from a protruding central disk—hence the common name “coneflower”—but some newer cultivars are flatter, more like a typical daisy. However, I’m particularly entranced by the flowers of E. pallida, above, which have delicate, pendulous petals that sway in the breeze, reminding me of a graceful hula dancer.

While the blossoms are often dramatic, the rest of the plant leaves something to be desired. Large, arrow-shaped leaves are spaced along coarse stems that rise from a central crown. Mine have been nibbled by rabbits, making them even more unattractive. Since the flowers are fairly tall—rising two to three feet on plants two feet in diameter—it’s best to place them in the middle of a border where the flowers can be seen, but not the foliage. Note that dwarfed cultivars are also available, so pay attention when you’re at the garden center.

Native to the moist prairies of North America, coneflowers are relatively easy to grow in USDA zones 3 through 9. Although marketed as drought-tolerant, it’s important to provide extra irrigation during dry spells. They prefer a loamy soil with plenty of organic matter, as you would expect from a plant used to the deep soils of the Midwest, but clay or sand will do with some added compost. Plants produce the most flowers in full sun. The dried seedheads add interest to the dormant winter garden so wait to remove dead foliage until new growth begins in the spring. Divide overgrown clumps in early spring or early fall, approximately every four years or so.

Blooms appear in mid-to late summer, something to keep in mind when choosing companions. Complementary flowers with similar water needs might include rudbeckia, coreopsis, and goldenrod. Or play off coneflower’s prairie origins by nestling plants among ornamental grasses such as little bluestem.

Coneflowers make an excellent addition to a wildlife garden. The blossoms provide nectar for bees, butterflies, and hummingbirds, so be sure to avoid insecticides (which shouldn’t be needed, in any case). Let the late flowers go to seed and enjoy the goldfinches and other birds that come to dine. Happily, the plants are also considered deer resistant.

As noted above, the scientific name for coneflowers is Echinacea purpurea. Yes, this is the same Echinacea that is used in herbal remedies—most often the roots, although leaves are sometimes dried and steeped in hot water. However, I consider the flowers far too lovely to justify harvesting the plant. If you add them to your garden, I’m sure you’ll agree.

One thought on “(Not Just) Purple Coneflower”