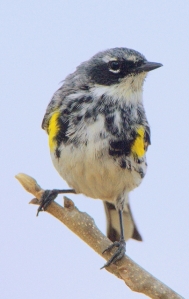 Many serious birders keep a life list of the bird species they’ve seen. We can tell you exactly how many birds are on that list, and there’s great excitement when we can add a new “lifer.” We may also have a list of “target birds,” those not yet seen, and we often spend considerable effort tracking them down. But once a year, we have an opportunity to add a new bird or two without lifting a finger.

All year, ornithologists are busy debating bird taxonomy. They present evidence—behavioral, morphological, a new DNA analysis, etc.—to support their opinions as to which species need to be split into two, which need to be lumped together as one (perhaps as subspecies), which need to be moved to a different genus, and other taxonomic changes. Every July, the AOS (American Ornithological Society) publishes the agreed-upon changes, and we all scramble to update our life lists.

For example, last year I gained a new bird when the Western Scrub-jay was split into the California Scrub-jay, which I’ve seen in California, and the Woodhouse’s Scrub-jay (right), which frequents my backyard feeders here in Colorado. You can see that it pays to keep careful records of birds seen over the years. If I hadn’t recorded my sightings during trips to the west coast, coupled with numerous photos, I wouldn’t have the dates and locations, or confirmation, that I’d seen both species. 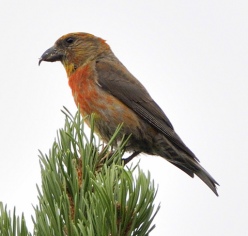 This year I wasn’t so lucky. North American birders have another new species that we can tick off. The Cassia Crossbill (Loxia sinesciuris), which I have not seen, has been split off from the Red Crossbill (Loxia sinesciuris, at right), which I have seen. This new crossbill is only present in the Albion Mountains and South Hills of Cassia County, Idaho. (I anticipate a trip in my future.) The evolution of this species is fascinating. You can read an explanation on the American Birding Association (ABA) blog. And by the way, the new species is pronounced “cash-a” after the county.

While that’s the only new bird I’m likely to encounter in the U.S., there are numerous other changes. The Magnificent Hummingbird has been split into two species: Rivoli’s Hummingbird (Eugenes fulgens) and Talamanca Hummingbird (Eugenes spectabilis). The one we have here in the U.S., mostly in Arizona, Mexico, and northern central America is Rivoli’s (left). Talamanca lives farther south, in the cloud forests of Costa Rica and western Panama. This means that we need to update our checklists, and if we’ve been birding in Central America, check any photos carefully.

I was particularly surprised to discover that Thayer’s Gull is now considered a subspecies of Iceland Gull: Larus glaucoides thayeri. Since I’ve already seen a Thayer’s Gull, my life list total doesn’t change. I just transfer my sighting to Iceland Gull. I’m keeping my notes, however, in case they decided to split the species again at some future date. (We had a white Iceland Gull visit Denver a few years past; I now feel a bit better about my inability to go find it at that time.)

While the familiar common names remain the same, there are numerous scientific name changes. Our American Northern Harrier (left) and Northern Shrike have been separated from their counterparts in the eastern hemisphere, important to note if you bird overseas. The taxonomic order of dabbling ducks have been updated, and several new genera have been created. On the other hand, geese in the genus Chen are now accommodated by the genus Anser. The sequence of sandpipers, blackbirds, and finches have also been rearranged. We’ll need to update their scientific names on our checklists, and new field guides will reflect the new order of species (no doubt causing no small amount of frustration).

Many of our perching songbirds have been regrouped into new families. Yellow-breasted Chat is no longer a warbler, having its own family, Icteriidae. This is so similar to the blackbird family Icteridae that it’s bound to cause confusion. Another big change is that New World sparrows are now in the family Passerellidae, while Old World buntings remain in Emberiziae.

If you have life birds from south of the border, you’ll also want to note a multitude of additional changes.

Not every change under consideration is accepted. Its seems that we’ve been anticipating a split between Myrtle’s (top photo) and Audubon’s Yellow-rumped Warblers, or Hoary and Common Redpolls, for years. Yet that didn’t happen. A list of species still being studied, as well as other details on all the changes, are available on the ABA website.
_____
The answer to last week’s bird quiz is Curve-billed Thrasher.