My yard is full of hummingbirds! Last summer I faithfully put out feeders full of sugar water, but had no takers. Not a single one. The only hummer that visited was a Broad-tailed Hummingbird that stopped by to check out the lone flower on a honeysuckle vine that was sitting in its can, waiting to be planted. But this year! From mid-July to late August, I probably had over a dozen in the yard at any one time—Broad-tailed, Rufous, and even several Calliope Hummingbirds that hung around for over a week. It was all I could do to keep my two feeders filled. 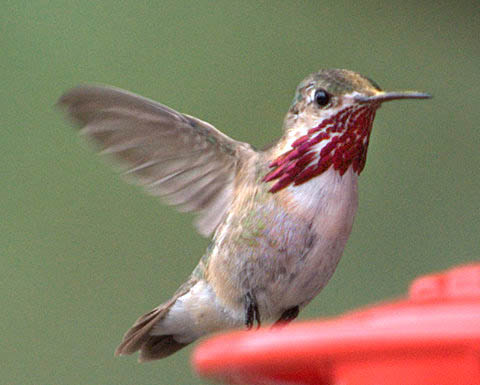 Why did the hummers visit this year, when they were so absent last year? It could be the weather, or the fact that the majority of lots around us now sport landscaped homes, but I believe the answer is quite simple.

Yes, my yard is full of red flowers—and pink, and orange, and purple flowers, too. All these colors are known to attract hummers. Last year I planted seedlings. Most didn’t bloom. This year, flowers fill the yard, and they all have hummers in attendance.

On the east side of our house, tucked behind the garage but visible from the trail through the adjacent open space, I planted a pollinator garden. I was thinking more about bees and butterflies, but I included several varieties of hyssop (Agastache) as well. This is one of my favorite flowers, especially the orange-and-purple Sunset Hyssop (A. rupestris). (I often combine these two colors in a flower bed, and to have them both appear in a single blossom sets my heart racing.) I had tried growing it at our previous home, but the perennial bed was too exposed for this borderline-hardy plant. Now, with the house providing shelter to the north and west, it’s thriving. And hummingbirds go nut over hyssop. 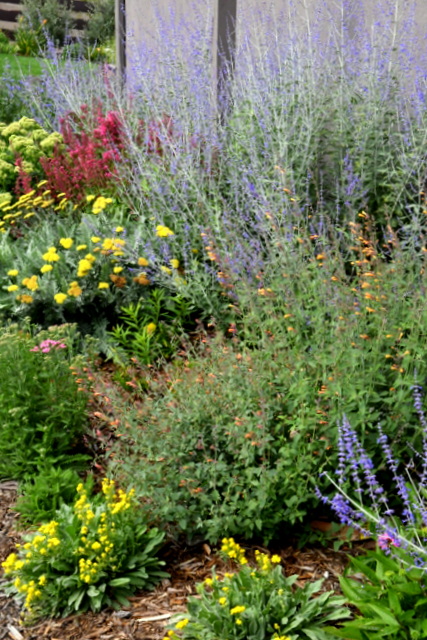 The narrow border at the east end of our lawn holds an assortment of mostly pink, red, and purple flowers. The first perennial I planted was Monarda, but overspray from the lawn sprinklers encouraged a bad case of powdery mildew, so I moved the plants to the other end of the yard, far from any wind-borne mist. Apparently I missed one. With our new sprinkler heads, it stays nice and dry, and it is totally covered with bright red flowers. Also known as Bee Balm, I think it should be named Hummingbird Balm. Red, tubular petals are exactly what the birds prefer. 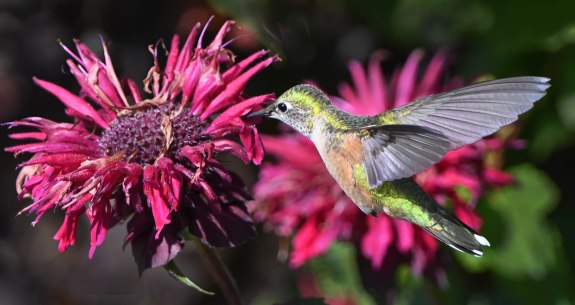 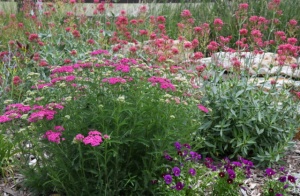 Sharing the bed with the Monarda are two dwarf cultivars: catmint and Russian sage, both of which stay compact and manageable. Jupiter’s Beard (aka Valerian, Centranthus ruber) blooms in a deep rose, matched by a spreading clump of vibrant, rose-pink yarrow, Achillea millefolia. In the back are salmon and apricot-colored daylilies. White-flowered obedient plant (Physostegia virginiana) and gray-foliaged snow-in-summer add some much-needed contrast, and burgundy violas peek out from beneath the foliage of larger plants. The viola’s burgundy hue is echoed in the foliage of a ‘Canada Red’ cherry, a tree-sized cultivar of our native chokecherry, Prunus virginiana. In late spring, the blooms of fuchsia-pink salvia and pale pink cranesbill (Geranium) kept to the same color scheme. 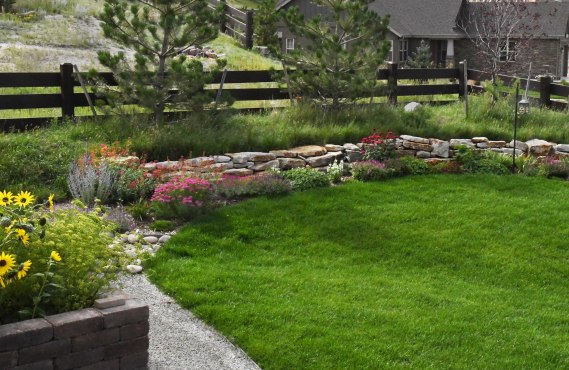 At the other end of the yard, the transplanted Monarda has spread. Its crimson blooms are complemented by the maroon foliage of the adjacent ninebark, Physocarpus opulifolius ‘Diablo.’ The colors remind me of a box of brightly colored Crayolas: periwinkle blue Bluebeard (aka Blue Mist spirea, Caryopteris x clandonensis), school bus yellow yarrow, golden tickseed (Coreopsis), and the deep orange avens Geum ‘Mrs. J. Bradshaw.’ The honeysuckle I mentioned earlier, the native Lonicera sempervirens, will eventually climb a trellis to our back deck, adding its red flowers to the mix. Meanwhile, one of our hummingbird feeders hangs in the same spot.

Having a yard full of hummers is fun for me, and also good for the plants. Only an estimated 10% of a hummingbird’s diet comes from nectar and other sugar sources. The rest comes from pollen, insects, and spiders. All the time the birds are hovering in front of a flower, they’re also scouring the blossom for good sources of fat and protein, such as aphids, mites, mosquitoes, small beetles, true bugs, weevils, flies, gnats, leafhoppers, and flying ants.

Two years ago, when I set out to landscape our new home, I had in mind the birds and the bees (and the butterflies and other wildlife). Now, as our plantings are becoming more established, our efforts are beginning to bear fruit—literally. Many of the berry-producing shrubs are adorned with their first crops, and at least the squirrels have benefitted. We have a lot of bees, including many natives, and an assortment of butterflies. But it’s the flowers I included specifically to attract hummers that have succeeded beyond all expectations.

One thought on “An Invitation to Hummingbirds”