Have you ever been on a snipe hunt? These nocturnal adventures are a classic part of summer camp. After explaining that a snipe is a small, furry creature, your counselor hands you and your cabin mates each a pillowcase and a flashlight. Then you’re turned loose in the dark and spooky woods (illustrated at right) to practice your “snipe call.” At various times, your counselor may ask, “Did you hear that?” or “I just got a glimpse—it went that way!” Of course, this sort of snipe is a mythical beast, and you are the butt of a practical joke that the counselors will find hilarious.

When I first became interested in birds, I was on a field trip with some more experienced birders when they excitedly pointed to a near-by pond and exclaimed, “Snipes!”

I didn’t believe them.

I was sure they were teasing me, trying to see how gullible I was, and I was having none of it. I’d been to camp. I knew snipes didn’t exist. 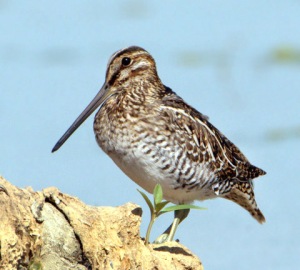 Except, they do. Snipes are freshwater shorebirds, with round bodies and long, straight bills. Our species, the Wilson’s Snipe, is found throughout North America, from the boreal forests of the far north all the way to northern South America. (The Common Snipe is the eastern hemisphere counterpart, and is a rare visitor to far western Alaska.)

Wilson’s Snipes migrate north to breed, but here in Colorado their winter and summer ranges overlap, and they’re present year-round. Look for them hiding in low-growing vegetation in marshy areas and wet fields. (I’ve even seen them in seasonal run-off ponds surrounded by houses.) It’s easier to spot the males during the breeding season, when they take to the sky in a showy aerial display, all the while making a distinctive “winnowing” sound with their specially adapted outer tail feathers. 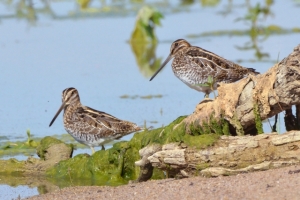 Nests are constructed on the ground, hidden in the vegetation. The female does all the work until the young are ready to fledge. Then the male shows up and finally acknowledges his paternal responsibilities, absconding with the oldest two siblings while the female keeps charge of the rest. Perhaps she finds this behavior annoying, as she feels no loyalty to her mate once the kids are gone.

Considered a species of least concern, Wilson’s Snipes are considered game birds, and are hunted in the U.S. for their large, meaty breasts, proportionately the largest of all shorebirds. These massive pectoral muscles enable them to reach 60 miles per hour in flight, a useful skill when evading hunters!

These birds may be plentiful, but they are sure are hard to see! Their brown and white spots, bars, and stripes help them blend seamlessly into their marsh habitat, and their secretive habits allow them to make the most of their camouflage. 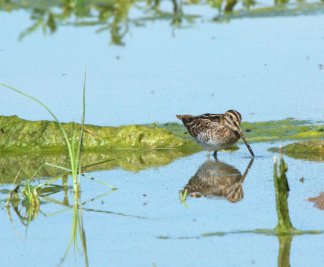 The first time I got a really good look at a snipe, I was on a field trip sponsored by the Colorado Field Ornithologists at their annual convention, held that year over Labor Day weekend. Our two trip leaders were very experienced, expert birders. We were checking out a reservoir on Colorado’s northeastern plains when we spied two plump birds with remarkably long bills probing the mud at the edge of the water. Their up-and-down motion reminded us of a sewing machine, and our leaders quickly labeled them dowitchers. They then proceeded to engage in a lengthy debate as to which species of dowitcher we were seeing—long-billed (the more likely Colorado species) or short-billed. 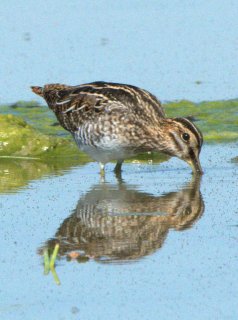 It’s amazing how a preconceived idea can color your observations. It was almost an hour later when someone suddenly blurted out, “They’re not dowitchers! They’re snipes!” The experts’ red faces were testimony to their embarrassment at being so easily mislead. (In our defense, I should point out that dowitchers are included among the “similar species” listed on the Cornell website, along with the American Woodcock, a bird only rarely seen in our state.)

While we’re not going to catch snipes with pillowcases and flashlights, it’s nice to know that some snipe hunts can end in success. Perhaps we should rename some other bird species as the Prairie Jackalope, or the White-bellied Sasquatch, so we can hunt successfully for them, as well.