I was happily photographing wildflowers along the edge of a park in Ohio when our friend, a local, warned me, “Don’t touch that!” I looked down. That plant looked familiar—a sprawling, low-growing shrub with reddish stems and shiny green leaves, each comprised of three leaflets. Wasn’t that…?

Yes, and thankfully I hadn’t actually touched any of it. It’s rather important that those of us who enjoy hiking be able to recognize poison ivy and other plants in the genus Toxicodendron. Toxicodendron means “poisonous leaf”—pretty appropriate for plants whose leaves contain urushiol, an oily chemical that frequently triggers an itchy allergic rash, or worse. 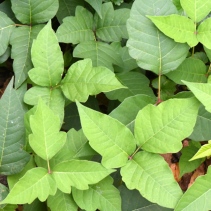 There are an assortment of species to watch for. Eastern Poison Ivy (Toxicodendron radicans, top and left) is perhaps the best known, as it’s common throughout most of the eastern U.S. and Canada, and I occasionally see it as far west as eastern Colorado. (For some reason, it also grows in Arizona.) Western Poison Ivy, T. rydbergii. Is found along the Pacific coast—and eastward to the Atlantic. Then there’s Western (aka Pacific) Poison Oak (T. diversilobum). found from Baja California to British Columbia, and eastward to Nevada, and Eastern (aka Atlantic) Poison Oak, T. pubescens, which grows in the southeastern states. Here is a link to some range maps I found helpful.

Finally, there is Poison Sumac, T. vernix. The common name is misleading—true sumacs are in the genus Rhus, although they’re all in the cashew family (Anacardiaceae). This small tree inhabits marshy areas of the eastern U.S., and is thankfully not found in Colorado.

Most of us learned the mnemonic as a child: leaves of three, let it be. But there are other, perfectly innocuous plants that also have leaves in sets of three, such as Three-leaf Sumac (Rhus trilobata), which I wrote about recently. On the other hand, poison sumac’s leaves don’t come in groups of three, and their shape is quite different from that of poison oak or ivy. (Click here for some excellent ID shots of poison sumac.)

Even with poison ivy (above) and oak, you can’t always depend on the leaves for ID. Being deciduous, these plants don’t always have leaves—and you can get a rash from the stems, too. So it’s helpful to know what they look like the rest of the year.

While poison ivy may start out as a low-growing shrub up to four feet tall, it can then put out vining runners that trail over the ground or climb nearby trees or walls. Look for the scraggly, hair-like aerial roots that may cover the stem. These help the vine hold on.

When the leaves first emerge in early spring, they’re wine-red with green veins. Mature leaves are smooth, green and arranged alternately. In late spring to early summer, inconspicuous clusters of small, creamy white flowers appear. These develop into waxy green berry-like fruits called drupes, which mature to a dull white color in the fall. Like other family members (think sumacs), the leaves are especially showy in autumn, turning a brilliant red-orange.

Poison oak looks very similar to poison ivy. It too has green, shiny leaves that come in sets of three—usually. Rarely, you may see five, or even seven, leaves in a cluster. These clusters alternate along the stem. The leaves are quite variable. They’re typically lobed—the edges bump in and out—but are never evenly scalloped or sawtoothed, and the plants never have thorns. Like poison ivy, they emerge with a reddish tint, and turn orange in the fall. They may be shiny—or not. They may have a waxy coating—or not. Note how variable the leaves are, just among the few in this photo: 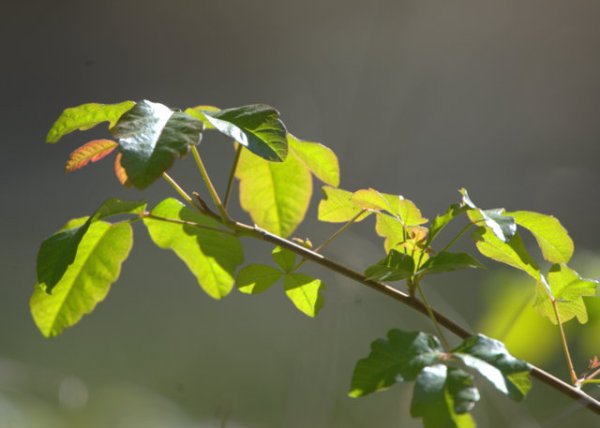 The plant’s size and shape isn’t much help either. The shrubs can be quite large, up to 15 feet tall, they may form 100 foot long vines, or they may spread out via their underground stolons and form a groundcover. Sneaky!

My conclusion? If in doubt, don’t touch! Be warned, however—in some cases even that isn’t enough.

Growing up on the west coast, I’ve spent a lot of time hiking where poison oak is very common. Happily, I seem to be in the 20% of the population that isn’t horribly allergic to it. (Repeated exposure can trigger an allergy, however.) At least I’ve never gotten a rash.

Contrast that with the reaction a friend had. He had joined me on a hike in California’s Santa Cruz Mountains. It was late fall, and the poison oak leaves were dry and crumbly. Microscopic bits were likely blowing in the breeze. He must have inhaled some, for he ended up in the hospital with a rash in his lungs. I was fine.

One thought on “Poisonous Leaves”