Birders have a bit of a reputation—we’re supposed to be focused on all things feathery. I know I amuse my friends and family when we’re enjoying a BBQ in someone’s backyard, or at the playground with the kiddos, and I point out the local sparrows and finches. I know all the local Red-tailed Hawks, and which poles they occupy at different times of the day, and I’m also quick to point them out as they soar over the road. (This may be one reason my husband prefers to be the driver when we venture out.)

But as much as I enjoy birds—finding them, watching them, identifying them—I also enjoy other kinds of animals, along with plants, rocks, stars, and clouds. It’s all good. One of the joys of birding is that it lures me outside where I can see creation in all its glory.

I’m reminded of an enjoyable and productive field trip to the central Rockies of Colorado. We had seen sapsuckers, thrushes, sparrows, and other mountain birds and were feeling quite content. We had just turned around to head for home when we were distracted by something relatively large running in the field next to the road. Everyone yelled and pointed at once.

We quickly pulled over and marveled at the spectacle of a badger, moving incredibly fast but so gracefully that it seemed to float over the uneven terrain, only to suddenly disappear down its burrow. There was no time to pull out my camera, but the image is imprinted in my memory. What a thrill! We don’t see badgers every day! When we compared notes later that afternoon, we all agreed that the badger had been the best “bird” of the day.

While badgers are hard to find, other mammals are almost expected. Depending on where we go, we frequently see deer (both mule and white-tail), elk, pronghorn, and even an occasional moose. Rodents abound—various tree squirrels, ground squirrels and prairie dogs, and cute little chipmunks looking for handouts. That dark mass in the tree nearby may turn out to be a porcupine. 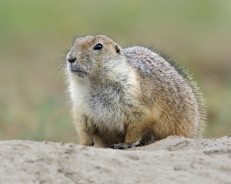 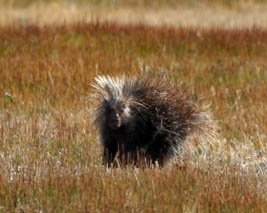 Of course, birding in the mountains has a few risks as well. We’re sharing terrain with bears and mountain lions. And while I haven’t seen either one when out hiking, I have come across fresh tracks—a bit unnerving, to say the least, especially when I realized they were on top of my outbound footprints!

While large animals are impressive, I think I prefer the smaller creatures. One of my favorites is the Eastern Collared Lizard (at top). I’ve encountered them in the deserts of western Colorado and eastern Utah, although they range as far as Oklahoma and Missouri to the east, and California to the west. The breeding males are so beautiful, it’s hard to believe they’re real. The males reach a fairly impressive 15 inches in length and can run as fast as a human. Collared lizards have strong jaws that crush their prey, which includes large insects and smaller lizards. They may even be cannibals! As imposing as they are, I’m still amazed that they survive being so colorful in a desert full of predators. Unsurprisingly, the females and non-breeding males are more dirt-hued, and thus much safer. 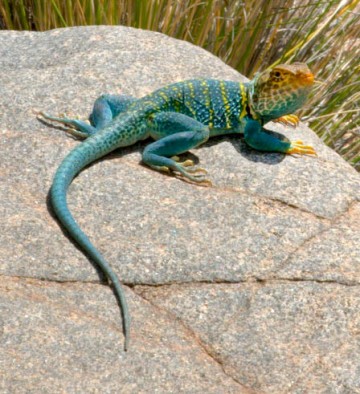 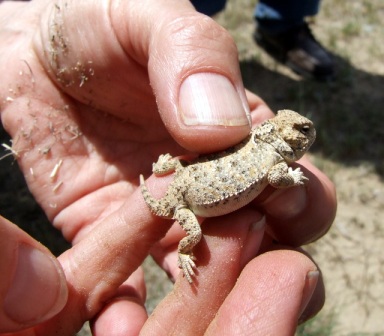 First of all, their shape and coloring render them near invisible against the dry and dusty ground. After all, it’s much safer to hide than fight. If that doesn’t work, their spiny skin may dissuade a predator from taking a mouthful.

The next line of defense is their ability inflate their bag-like bodies, doubling their size. The result is something along the same lines as a puffer fish—a balloon covered with sharp spines that would discourage the hungriest of predators.

Then there’s the last resort—and it’s totally bizarre. Short-horned Lizards have ducts in the corners of their eyes from which they can shoot blood! I’m amazed that a lizard only a few inches long, is able to nail a predator up to three feet away. Moreover, they supplement the blood with a chemical that is noxious to coyotes and other canines.

I haven’t even mentioned the insects, wildflowers, and fungi we come across, but that’s a post for another day. You never know what you’ll find if you just keep your eyes open.