I haven’t been birding in what seems like ages. I won’t go into the list of reasons, but it involves a new job and lots of home organizing. I need a birding fix. Truly, I’m getting desperate.

A couple of years ago I wrote a post titled “15 Birdy Things to Do When You Can’t Go Birding.” I was in a similar situation—I’d sprained my ankle and was propped up on the couch, missing out on a number of local birding trips. One of the items on my list of things to do was to watch live bird cam feeds.

I’ve known about bird cams for years, but never paid much attention to them. I can only watch a nesting hawk for so long before clicking on something else, something with a bit more action. But now I’ve finally discovered the web cams hosted by the Cornell Lab of Ornithology, and I’m hooked.

As I type this, I’m watching their Ontario FeederWatch Cam. It’s in a backyard in a residential neighborhood in Manitouwadge, Ontario, a bit north of Lake Superior. There is a small swamp out of sight behind the back fence, with larger stands of woods and a small lake nearby.

The camera is focused on a platform feeder and a tube feeder (both filled with black oil sunflower seeds), a log with holes that can be stuffed with suet (it’s currently empty), a mesh feeder that holds shelled peanuts, and a cute lighthouse nyjer feeder. In the last few minutes I’ve seen a Red-breasted Nuthatch, a number of Pine Grosbeaks, a Black-capped Chickadee, a couple of assertive Blue Jays, both male and female Evening Grosbeaks, and one starling. I’m really hoping for some boreal birds—species I can’t normally see here in Colorado.

Earlier today I was watching the live feed from Sapsucker Woods. This site includes a ten acre pond and an open deciduous forest, and is located on the Cornell campus in western New York. 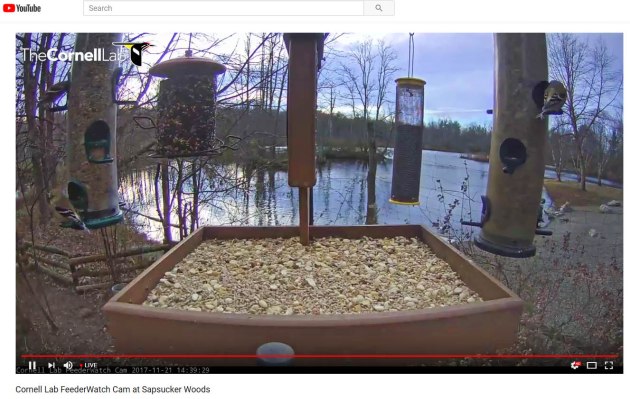 If I get tired of looking at northeastern species, I can opt to watch for California Condors near Santa Barbara, California; hummingbirds in west Texas; Ospreys in Montana, or even Bermuda Cahows on Nonsuch Island in Bermuda.

There are other live webcams besides the ones run by Cornell. For example, I may not be able to afford a plane ticket to New Zealand, but I can watch the Northern Royal Albatross colony at Taiaroa Head. I also enjoy watching for the Great Gray Owl to return to its nest. There are plenty of pre-recorded bird videos on the web; the trick is in finding a live feed, an essential if you want to create a web cam life list.

Watching live cams like these isn’t just a way to use up a lot of time. They also give me an opportunity to familiarize myself with birds I can’t see near home. You can see the birds, hear the birds, and watch their behavior.

Many of the cameras are very close to the feeders, providing an excellent view of the birds who visit. I can see details I’d never noticed before, such as the well-defined white patch under the eye of some Pine Grosbeaks. Are those immature males? Now I have to go look it up! I’m also noticing minor variations between western and eastern versions of the same species. For example, the Ontario Blue Jays appear much brighter than the ones here in Colorado, with crisp lines between the black and white feathers. Is it my imagination, or are they actually more striking?

If there’s one drawback to birding online, it’s that most of the cams are focused on either nesting birds or feeders. It makes sense—you want to point the camera at a place where you know there will be birds—but it also means that for the most part, we don’t get to see those species that prefer other food sources. I’m particularly bad at identifying eastern warblers—I haven’t had an opportunity to visit the eastern U.S. during the warmer months. But warblers eat insects, not sunflower seeds, and I have yet to see one on any of these bird cams.

Still, for someone who can’t easily get out to go birding in person, watching a live feed is an enjoyable alternative.