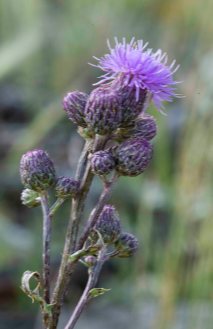 The flowers could be considered somewhat pretty—a white or lavender tuft reminding me of cornflowers (aka bachelor’s buttons). The somewhat pretty flowers are probably the only positive aspect of these plants. A common noxious weed, knapweed is the bane of my garden.

The problem is that we live immediately adjacent to an open space, a few supposedly wild acres left by the developer (probably because it’s too steep to build on). There’s Gambel’s oak, six Ponderosa pines, a smattering of yucca, assorted wildflowers, and some rather nasty weeds.

The hillside next to our yard had been covered with Rocky Mountain penstemon when we chose our lot, but then it was bulldozed to lower the grade. I assume that removing part of a hillside was cheaper than building a retaining wall.

I appreciate that we don’t have dirt washing into our home, but I miss the flowers. The soil was left bare for months, then finally covered with a grass seed-impregnated roll of straw in late August. Since the straw had been left sitting in its plastic covering all summer, effectively solarizing the seeds, nothing grew.

Then, the next spring, we suddenly lived next to a hillside completely covered in weeds—horseweed, mullein, and yes, knapweed. (In the photo at right, the horseweed is the plant with strappy leaves, growing out of a gray, fuzzy-leafed mullein rosette.)

Theoretically, the landowner (in this case, the developers) was required to control at least those weeds on the state noxious weed list (both mullein and knapweed qualify), but nothing was done. They grew. They flowered. They went to seed. And now I spend my days pulling weed seedlings from our landscaping.

Both species originated in Eurasia, and were probably introduced to the Americas in a bale of hay. They’ve certainly done well in their adopted land, and are likely here to stay. Still, I don’t want them in my yard, and as their inclusion in the noxious weed list implies, neither does the state of Colorado.

Spotted knapweed is an annual; Diffuse knapweed (above) is a biennial. They both reproduce primarily from seed—and they’re very good at producing seeds. I was horrified by Spotted knapweeds’ ability to create up to 900 seeds per plant, until I read that Diffuse knapweed grows three times that many! The seeds remain viable for years, accumulating in a soil bank just waiting for the right conditions to germinate.

Even worse, those seeds don’t confine themselves to the area where the parent plant grow. No, Diffuse knapweed plants become tumbleweeds, flinging seeds far and wide as they are blown across the landscape. A few years ago, a significant windstorm filled our yard with tumbleweeds (I filled our huge trash bins several times with stomped-on dry plants), and we’re still reaping the consequences. 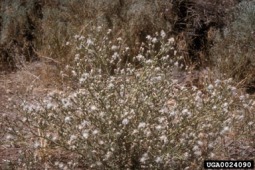 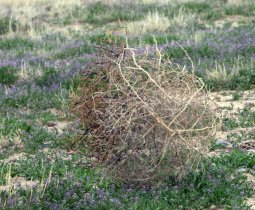 Spotted knapweed also has a back-up reproductive strategy—it can send out later roots that then send up new plants.

These weeds are easily recognized. They both grow up to three feet tall, with prickly leaves on stiff branches that give them a ball-shape. The flowers, which bloom all summer, are urn-shaped, filled with fringe-like petals (think cornflowers) and later, fluffy seeds. At the base of each flower is a structure called in involucre. It looks a bit like a miniature pineapple. You can see a cluster of involucres in the photo of the Spotted knapweed, above. The involucre has spiny bracts. In the case of Diffuse knapweed, those bracts are tipped with a spine that can be rather painful when grabbed.

The best way to control these weeds is to attack while they’re small. Seedlings form rosettes, much different from the mature plant, as you can see from these photos. Whatever you do, don’t let them go to seed. Since the plants die after flowering, simply mowing them down before they bloom will go a long way to eliminating the problem for next year—or until our next windy day.

One thought on “Nasty Knapweeds”