Early one morning a couple of weeks ago, some friends and I were birding around Kettle Lakes, a number of large ponds on U.S. Air Force Academy property. We exclaimed over the accuracy of a Belted Kingfisher’s dive to nab a fish for breakfast, in spite of the distortion caused by the air-water interface. A Great Blue Heron followed suit, coming up with a flapping fish in its beak.

Scanning the surface for ducks and coots, I noticed that several partially submerged logs had wicked looking spikes attached to them: 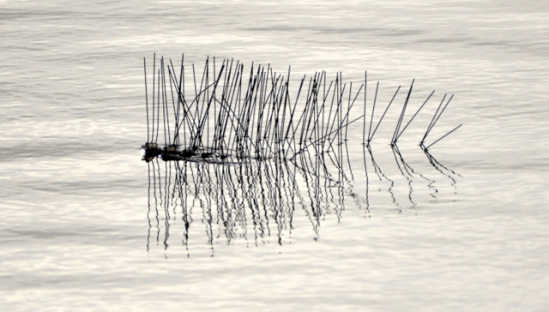 Why would the AFA go to the hassle of defending a soggy piece of wood? Surely, any birds that happened to perch there weren’t bothering anyone. My knowledgeable friend, whose two sons had attended the academy, explained that the spikes were there to deter Double-crested Cormorants. Apparently, the ponds were stocked with rainbow trout, and the cormorants were too good at eating them. To keep the anglers happy, the air force decided to eliminate the birds.[1]

Since cormorants aren’t legally hunted, I had assumed that they were protected by the Migratory Bird Act. And they are—now. But when they compete with humans, it’s easy to override that protection and “manage” the birds.

The primary excuse for killing cormorants is that they significantly impact commercial or recreational fisheries, especially hatcheries. Accordingly, under 1998’s the Aquaculture Depredation Order (AQDO) and 2003’s Public Resources Depredation Order (PRDO) 50 CFR 21.48, the US Fish & Wildlife Service allows “State fish and wildlife agencies, federally recognized Tribes, and USDA Wildlife Services to kill cormorants and destroy nests with eggs/chicks when they are causing damage to public resources such as fish (including hatchery fish), wildlife, plants, and their habitats.”

I had two questions: are there too many Double-crested Cormorants? And, are there studies confirming that they are a problem?

“Too many” is a relative term. Historically, numbers were far higher than they are now, and their range was more extensive. However, populations took a nosedive in the 1800s and early 1900s, from a combination of egg collecting, hunting (for meat, feathers, and sport), and intentional killing as a pest species. After WWII, nest failures added to the decline, blamed on the introduction of DDT and similar pesticides, until the species was in danger of extinction.

Then came 1972, one of the few good years in recent cormorant history. The National Audubon Society listed the double-crested cormorant as a species of special concern. The state of Wisconsin declared cormorants endangered and began building nesting structures to help them return. Lawmakers banned the use of DDT, and Congress signed a revised Migratory Bird Treaty Act that put cormorants under federal protection.[2]

Cormorant populations have been recovering ever since the eggshell-thinning pesticides were banned, and the species is once more abundant—a “species of low concern.” You’d think the species’ problems were over. But now the persecution is starting again.

The jury is still out. The Cornell Lab of Ornithology summarizes the issue:

Cormorants feed opportunistically on fishes that are readily available and often congregate where these fishes are easily caught. In natural environments, fish species of direct interest to recreational or commercial fishermen typically do not make up a large part of the cormorants’ diet… . Exceptions do occur, however, and cormorant impacts to commercial and recreational fisheries, including economic impacts, have been documented. Cormorant impacts to island vegetation and co-nesting species have also been documented. However, the biological and economic impacts attributed to cormorants, especially fishery impacts, are often complex and difficult to establish unambiguously.

It seems that more studies are needed before drastic action is taken. Meanwhile, the number of birds killed is surprisingly high. I could only find numbers from a decade ago:

Cormorants aren’t good candidates for a beauty contest: they’re big and black and they poop digested fish. Yet, I find myself agreeing with a number of conservation organizations, such as the National Audubon Society, in opposing large-scale culling of the birds. Join me?

[1] Newsletters (2013 and 2014) from the Colorado Fish and Wildlife Conservation Office reported that Double-crested Cormorants were removed “under a migratory bird permit at the Kettle Lakes to minimize the loss of stocked rainbow trout.”

[2] Quoted from an article in Natural History.

The answer for last week’s quiz is California Towhee.