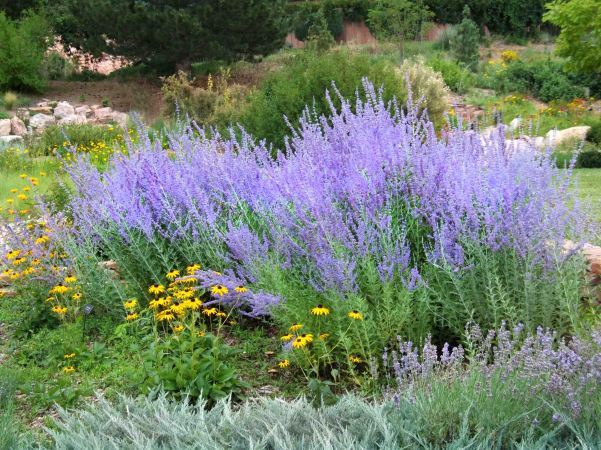 When Russian Sage (Perovskia atriplicifolia) first appeared on the scene, I jumped right on the bandwagon, extolling its virtues and recommending it for Colorado gardens. I even planted it in my own yard. And yes, this hardy perennial lived up to my expectations. It was tough, drought-tolerant, and the deer and rabbits left it alone. On top of that, late summer brought a wealth of gorgeous lavender blossoms that covered the plant’s ferny, silvery-gray foliage. What’s not to like?

I’ll tell you. The plant is a thug.

It elbowed in where it wasn’t wanted, over-growing the generous space I’d allotted.  It upended concrete stepping stones on its way to crowding out the Sunset hyssop (Agastache rupestris) I’d paired it with. Then it sprouted in the midst of my lovely, soft peach yarrow (Achillea) groundcover. In spite of its rave reviews, my Russian Sage appeared bent on world domination. I decided to pull it out. Take that, you evil mastermind!

Not only is Russian Sage a thug, it’s a tenacious thug. I removed the stepping stones, raked back the mulch, and dug in with my shovel. Immediately running into some large roots, I dug harder. I sacrificed the yarrow, exposed more dirt, and tunneled deeper. Recalling my daughter’s summer on an archeological dig in Greece, I traded down to a trowel and followed the runners for foot after foot across the perennial border, carefully extracting them from among the better behaved denizens. Finally, I called in reinforcements. My husband was able to expose the entire root ball (the size of a small car) and ultimately yank it out of the soil.

Mission accomplished—except I’d planted three of the buggers. Having condemned the survivors, I gave them a temporary reprieve while our muscles recovered. 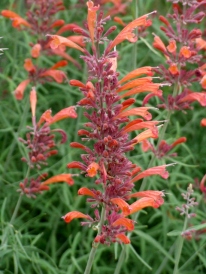 Now I had a large hole in my border, just begging me for some new plants (gee, darn). What could I plant in place of these invasive bullies that would achieve the same effect? This was my pollinator garden, so my first priority was choosing a perennial that attracted beneficial insects. Next, it had to complement the existing plants, which included orange butterfly weed, brilliant raspberry-pink “purple” coneflowers, and mustard-yellow rabbitbrush, in addition to the already mentioned yarrow and hyssop (Agastache, right). With all those warm tones, I wanted lavender flowers to cool things down, and the bloom had to happen at the same time. (The garden includes other flowers that bloom earlier, giving insects access to nectar all season long.) 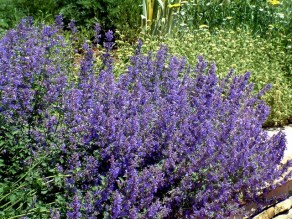 I uncovered several candidates. Catmint is similarly drought-tolerant, pretty much foolproof, and comes in various sizes. Its flowers are the same soft purple as those of Russian Sage. It blooms earlier in the summer, but deadheading often encourages a repeat performance. And while it can reseed a bit too enthusiastically, some newer cultivars are sterile, solving that problem. 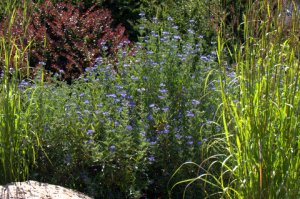 Blue Mist Spiraea blooms in late summer, and would fill the space admirably.  It, too, is drought tolerant and well-adapted to Colorado. While it also self-seeds a bit too readily, the seedlings are easily pulled, or you could save them for a gardening friend.

The only issue with both of these options is that they already feature quite strongly in my landscape. I didn’t want too much of an admittedly good thing. I came up with two other possibilities, but the nurseries were sold out for the season. Now I wait for spring while debating which to trial—maybe both? 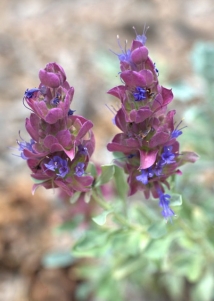 A California native, Mojave Sage (Salvia pachyphylla) is described as being tough and drought resistant, plus it has purple flowers on silver foliage. Mature plants reach two to three feet in height, and are three feet wide. It’s also deer and rabbit resistant, but attracts bees and butterflies.

Unfortunately, I found numerous commenters reporting that their plants didn’t survive a Colorado winter. While it’s supposed to be hardy to zone 5, it hates soggy soil, which may explain their failure. But if I have to keep replacing plants, not only would that add up money-wise, but the they would never be tall enough to be seen over the hyssop clump in front. 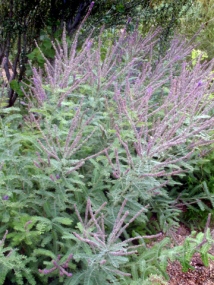 The other contender is Leadplant (Amorpha canescens), native to the Great Plains. It’s a deciduous shrub that typically reaches two to three feet in height, with fern-like green leaves and dark purple flower spikes in mid-summer. It’s hardy down to zone 2.

On the downside, Leadplant is not as drought-tolerant as the xeric species that would surround it. And while the blossoms do attract butterflies, rabbits find it just as tasty—a problem in my yard. You can read more about leadplant in my September, 2016 post.

None of these alternatives is ideal, but then, few plants are. Besides, practically speaking, what plants I choose will likely depend just as much on availability as on desirability!

My photos of Russian Sage were taken at local botanic gardens, as I no longer have any in my yard. And note the sprout in front of the lovely rock planter, where a runner has escaped confinement.