The answer to last week’s quiz is… Limpkin. Did you recognize it? I almost didn’t!

Here in the US, Limpkins are only found in Florida, although their range extends well into South America. It’s quite a plain bird, dressed mostly in brown with a few white spots, with a long, orange beak. Limpkins are so unlike other birds, this one species has its own family, Aramidae. It’s in the order Gruiformes, where you’ll also find rails and cranes.

In the Caribbean, Limpkins hang out in dry brushy areas. You can find them in the mountains of Mexico and Central America. Those in Florida, however, are normally found in freshwater wetlands. That’s because the Florida birds dine almost exclusively on apple snails, a very large species that lives in fresh water. 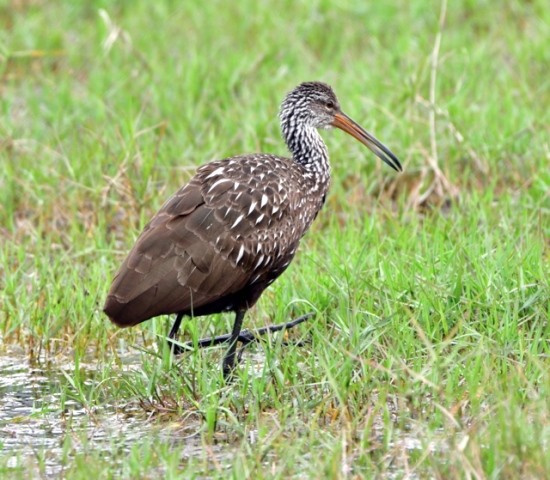 My one previous Limpkin sighting, many years ago, was at a freshwater pond covered with water hyacinths, where the bird was walking daintily over the floating vegetation, supported by its long toes. Now that I was back in Florida (last February), I hoped to see another Limpkin. This time, I wanted photos—perhaps of a pair of birds munching on escargot, with a lovely, flower-filled lake in the background. I visited a number of likely sites, and the scenery was all I had hoped for, but the birds weren’t cooperating. I couldn’t find a single one.

Finally, on the last day of our trip, I was out birding north of Tampa with a friend I knew from Colorado. Although Bonnie had just moved to Florida a few months earlier, she had already visited many of the local birding hotspots. She was confident she could find me a Limpkin. 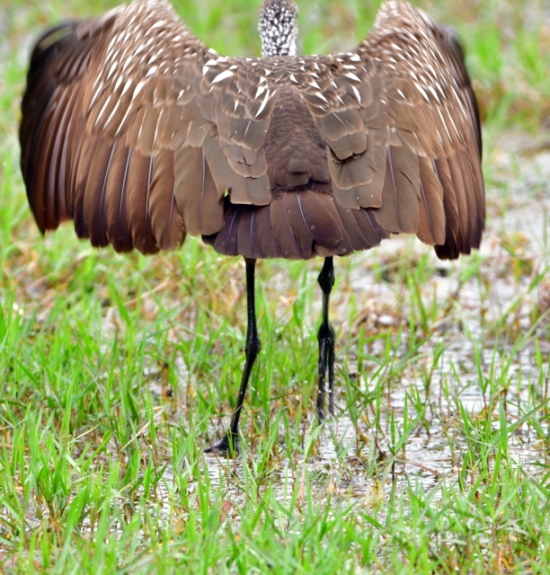 Much to my surprise, instead of heading to a park or wetland, we aimed for a shopping center! Turning into the parking lot, she parked the car next to a small, fenced field. I got the impression that it was a catchment basin, designed to catch runoff from the pavement during Florida’s frequent downpours. On this day it only held a few inches of water and a lot of grassy weeds. This looked nothing like the flower-covered lake I was imagining. Would we find a Limpkin here?

When you have a mental image of something, it can be difficult to recognize what you’re actually seeing. My mind pictured a brown bird on a lily pad. What I saw was a brown bird surrounded by grass. It took me a moment to realize that I was seeing what I’d been searching for.

I don’t know what this bird was eating; I didn’t see any apple snails. It wasn’t able to stride about as gracefully as it could have on an exposed pond, and I didn’t get quite the images I’d hoped for, but still, I did get some, as you can see.

Which goes to show—you can read all the books and websites, learn a species’ habitat and food preferences, but that doesn’t guarantee the bird will do what you expect it to do. Perhaps this particular Limpkin just wanted to hang out in a wet, grassy field.