Every year, the American Ornithological Society (AOU) reviews a number of proposed changes to the classification of North American birds. This affects the definitive list on which we birders base our life lists. Species may be added or deleted. Sometimes, a species is divided into two or more new species, such as the split of the Western Scrub-Jay a few years ago. (I gained a new life species as a result, as I have seen and photographed both the California Scrub-Jay and Woodhouse’s Scrub-Jay.)

Other times, species may be lumped together—what was once considered two species is now thought to be only one, with various subspecies. Sometimes, entire genera are moved into new families. Or, a species remains unchanged, but the name is updated, as when the Gray Jay became officially known as a Canada Jay.

The AOU recently posted their list of updates for 2019. This year, most of the changes don’t apply to birds in the USA or Canada. (The AOU covers all of geographical North America, south through Panama, while the American Birding Association only covers the US, including Hawaii, and Canada.) While none of the changes are earth-shattering, you will need to update your list of North American species.

And by the way, if you read my post on a proposed split of Harlan’s Hawk from the rest of the Red-tailed Hawks, note that the split was not approved. Harlan’s remains a subspecies, at least for now.

What was approved? Here are the changes that affect birders in the ABA area:

Velvet Scoters (Melanitta fusca) are found in western and central Eurasia, occasionally venturing as far as Greenland, but to date have never been seen in the North American ABA area.

Stejneger’s Scoters (Melanitta stejnegeri) may visit us from their home in northeast Eurasia. They’ve been seen in Alaska, so if you bird there, know how to recognize them. Also, birders along the coast of northeastern North America should be on the alert.

Our familiar White-Winged Scoter has been given a new species name, M. deglandi. The common name stays the same.

A Ground-Dove is now a Ground Dove
It’s time to use that search-and-replace feature in your life list. All ground-doves have lost their hyphens, turning into ground doves. It turns out that those hyphens mean something—that all the birds with the same hyphenated “last name” are close relatives. In the case of these doves, that doesn’t apply. 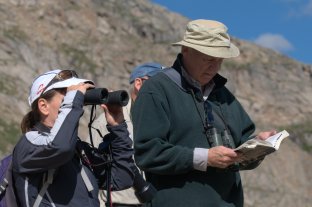 The rest of the changes involve either scientific name change—(the genus and/or species is different—or the phylogenetic sequence has been reordered—the birds have been moved around in the list and in future editions of field guides. For example, a number of warblers were moved from the genus Oreothlypis to the genus Leiothlypis, and the sequence of some plovers, swallows, and New World sparrows (Passerellidae),  has been rearranged. This won’t affect recreational birders until new editions of the various field guides reflect these changes.

There are a long list of additional changes that affect Central Americas birds, so if you plan a trip in that direction, you’ll want to update your species lists.

There’s one more change. The AOU’s “Committee on Classification and Nomenclature of North and Middle American Birds” is now known as the “North American Classification Committee,” or simply the NACC. That’s a big improvement, don’t you think?